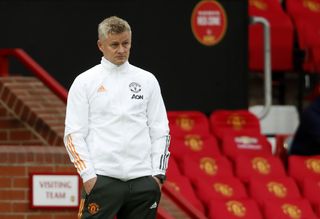 Manchester United have signed Brazil defender Alex Telles and are closing in on a deal for Edinson Cavani as they move to strengthen their squad in the wake of Sunday’s 6-1 humiliation by Tottenham.

United are understood to have agreed a fee for £13.5million plus £1.8million in potential add-ons with the Portuguese club for Telles, with a deal for free agent Cavani also believed to be close.

United have also announced the signing from Sochaux of centre-back Willy Kambwala, who will join the Under-18s squad, while Chris Smalling has completed a permanent move to Roma.

Telles told his new club’s website: “To join a club with the prestige of Manchester United is a huge honour.

“You have to work hard to get to this moment in your career and now I am coming to this club, I can promise that I will give everything in my heart to be a success here.”

Southampton have been in contact with Everton about re-signing Theo Walcott, after the Merseyside club landed Ben Godfrey from Norwich.

With new signing James Rodriguez having made the wide-right spot his own thanks to an excellent start to his Goodison Park career, Walcott’s first-team chances look like being limited.

The 31-year-old is in the final year of his contract and while a return to Saints is thought to be his preferred choice, he has also been linked with Crystal Palace, West Ham, Fulham and Newcastle.

Norwich announced they had received a club-record fee for Godfrey, whose deal ties him to Everton until the end of June 2025.

The 22-year-old made 30 appearances for relegated Norwich in the Premier League last season, and had been linked to a number of top-flight clubs this transfer window.

The centre-back completed a medical with the Premier League leaders over the weekend before the deal was announced on Monday morning.

The France Under-21 international has made 82 appearances since joining the Gunners from Lorient two years ago but he has found himself surplus to requirements under Mikel Arteta this season.

Manager Scott Parker still wants to bolster his defence ahead of the transfer deadline, but is also keen to add England star Loftus-Cheek to the Craven Cottage ranks.

The 24-year-old has only featured once for Chelsea this term, in the 3-1 Premier League win at Brighton on the opening weekend, and has spent the last 16 months battling a torn Achilles tendon injury.

Tottenham have held talks with a view to signing Swansea centre-back Joe Rodon, while Ryan Sessegnon has joined Bundesliga outfit Hoffenheim on loan for the rest of the season.

The 20-year-old has struggled to make an impact since joining Spurs for £25million last summer and has been sent out to get some game-time.

Wolves defender Ruben Vinagre has completed a season-long loan move to Olympiacos, with an option for the Greek champions to make the deal permanent, while Chelsea midfielder Tiemoue Bakayoko has joined Napoli on loan for the rest of the campaign.

Leicester forward Rachid Ghezzal has joined Besiktas on a season-long loan. The Algeria international spent last term on a temporary deal with Fiorentina.