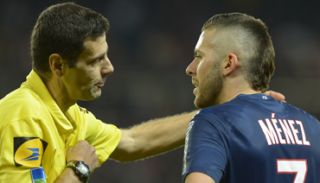 Menez, who scored when PSG won 1-0 at Olympique Lyon last weekend to clinch the title, did not appear at the disciplinary hearing.

"After hearing the player's representative and from the referee of the game, the disciplinary commission suspended him for four games," the LFP said in a statement.

The sanction will take effect next week, leaving Menez free to celebrate the title with PSG fans when the capital club host bottom side Stade Brest on Saturday.

The France forward will then miss the first three matches of next season.