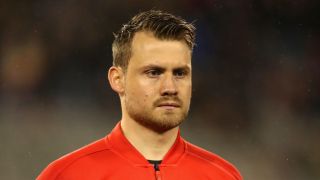 Simon Mignolet accepts it is "not easy" to be consigned to Liverpool's bench following the signing of Alisson.

The Brazil international became the world's most expensive goalkeeper when he joined from Roma last July in a deal that could rise to €72.5million, although that fee was then eclipsed by Kepa Arrizabalaga's switch from Athletic Bilbao to Chelsea.

Mignolet has yet to make an appearance in the Premier League this season as a result, having battled with Loris Karius for the gloves last term, although he is set to face Wolves in the FA Cup on Monday.

At the start of the season Karius was given the green light to join Besiktas on loan, a decision Mignolet described as "bizarre", and he is not enjoying playing a back-up role to Alisson.

"Of course it isn't easy," Mignolet told Liverpool's official website. "I've spoken about it before - it's not something that you want to be doing, but the team is doing so well and you just try to help the team as best as you can.

"I'm behind Alisson who is a really good goalkeeper - probably within the best five goalkeepers in the world, if not the best - and you can accept and understand it.

"Not only between the goalkeepers, but I also know that I have to be ready for if anything happens or the team needs me, and therefore I have to be working hard on daily basis for when the chance comes along or I get called upon.

"It's not easy, mentally especially, but I try to keep the focus as best as I can. That's the only thing I can do really."

2018 was a year full of ups, downs & everything in between. I’m honoured to have experienced many memorable moments, & I'll keep working hard to create a special 2019!

Thank you for your ongoing support & kind words, & I wish you all the very best in the coming year!#YNWApic.twitter.com/RK1xcjgiUy— Simon Mignolet (@SMignolet) January 1, 2019

Alisson is widely regarded as among the best goalkeepers in the world, an assessment with which Mignolet agrees.

"I think he's just a naturally good goalkeeper," Mignolet added. "He's got the talent and everything comes natural to him, which makes him a really special goalkeeper.

"He doesn't have to really think about anything and switch off, it’s always coming fluently and that makes it very easy for him to play in goal.

"He's number one for Brazil in front of the 'keeper for Manchester City, so that says itself a lot already. He's doing really well for the team and I can only learn from him."