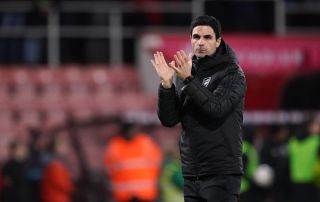 Mikel Arteta declared himself “happy” with Arsenal’s business in the January transfer window and hinted he was pleased to see no senior players leave the Emirates Stadium.

Granit Xhaka was expected to depart at the beginning of the month, but had his mind changed by the Spaniard while Pierre-Emerick Aubameyang was linked with a move to Barcelona.

Both are still part of the Gunners squad, which has been boosted by the additions of Pablo Mari and Cedric Soares this week.

“I am happy for two reasons. We believed we could strengthen the team a little bit in some areas with the financial situation we have, but as well four weeks ago I was very concerned with some of the departures and we have been able to manage that so far,” Arteta said.

“We have been trying to be active in the market to resolve some of the issues we have been going through in the last few weeks.

“We found two players that we believe can be very useful and could improve our squad, obviously with the resources we have as a club, and we are happy with what we’ve done.”

It has been a positive few days for Arsenal, with Shkodran Mustafi’s ankle injury at Bournemouth only a sprain and he could return for Sunday’s trip to Burnley in the Premier League.

Aubameyang and David Luiz are available after serving suspensions, but Southampton loanee Soares will not be fit until after the mid-season break.

The Portugal international has a slight knee injury which is not thought to be serious and Arteta is delighted to have another option in the full-back areas.

“He is a player who has big experience of playing in different countries and in this league, so he knows what it means,” Arsenal’s head coach added.

“And he has been very willing to go to another top club. He has that desire and commitment.

“I followed him a few seasons ago and I really like what he can bring and they were the right conditions for us as well to try to improve the squad.”

It was a similar situation for Spanish centre-back Mari, who has joined from Flamengo on an initial loan with the option to make the transfer permanent in the summer.

Arteta said: “For me it is very important. He balances what I want to do from the backline and gives us more options and more solutions.

“He opens up the pitch more. He is one we have followed for the last few months and we are happy to have.”

With the January window due to close at 11pm on Friday, Arteta admitted he did not expect any more business: “I would say no, but you never know.”