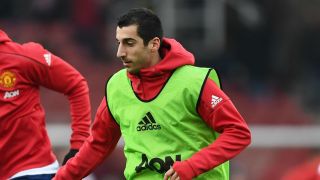 Jose Mourinho says attacking midfielder Henrikh Mkhitaryan is "not in the best condition" after the planned withdrawal of Manchester United's goalscorer in the second half of a 1-1 draw at Rostov in the Europa League's round of 16 on Thursday.

The Armenia international, signed from Borussia Dortmund in July, also scored his team's only goal away to Saint-Etienne in the previous round last month, sealing a 4-0 aggregate victory, but had to be withdrawn in the 25th minute after picking up a hamstring injury, forcing him to miss the

EFL Cup final triumph over Southampton and a 1-1 Premier League draw at home to Bournemouth on Saturday.

The 28-year-old returned to the starting XI at Olimp-2, putting United into the lead in the 35th minute with an important away goal, before Alexander Bukharov equalised for the Russian hosts eight minutes into the second half.

Mkhitaryan was replaced by Anthony Martial in the 67th minute and it remains to be seen if Mourinho will risk starting him again away to Chelsea in the FA Cup quarter-finals on Monday.

Our midfield Armenian was thankful for the support from his home country after scoring for against FC Rostov tonight... March 9, 2017

"We know he cannot play 90 minutes," the manager said.

"We knew he would only play 60 minutes - it doesn't matter [what] the result [was], we made that decision together as he is not in the best condition.

"We gave him freedom to play in attacking positions with Zlatan [Ibrahimovic], to try to find spaces to score. He did well and managed to finish the game without injury, which is important for us."

We wanted more, but we take home a draw and an important away Thanks to all supporters for covering such a long distance March 9, 2017