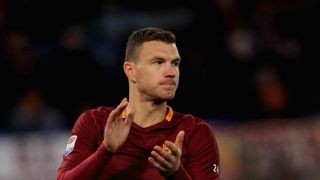 Roma have plans in place if Chelsea's reported swoop for Edin Dzeko and Emerson comes to pass.

The Premier League club have been linked with a surprising selection of strikers over recent days, with former Wolfsburg and Manchester City man Dzeko one of the men understood to be in their sights.

Left-back Emerson has missed much of this season due to rehabilitation from a cruciate knee ligament injury but Dzeko's departure would be immediately and keenly felt.

The 31-year-old Bosnia-Herzegovina international has scored 61 times in 117 appearances for Roma since joining on an initial loan from City in 2015.

Dzeko was named in the starting line-up for Sunday's crunch clash against Inter, amid speculation it could be his Roma farewell, and director of football Monchi addressed the situation before kick-off.

Asked whether Dzeko and Emerson might join Chelsea, the one-time Sevilla mastermind told reporters: "Whatever will be will be. I work every day to have players suitable to replace our players, my job is always to strengthen my club.