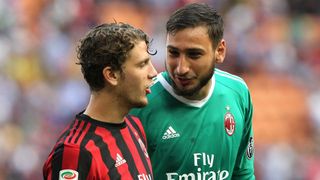 Vincenzo Montella has warned potential suitors that prodigious 18-year-old goalkeeper Gianluigi Donnarumma is not for sale and urged the youngster to "use his head" amid speculation of an AC Milan exit.

Donnarumma has been Milan's first-choice goalkeeper since early last season, racking up 67 Serie A appearances already despite his tender age.

As such, numerous big clubs are understood to be keeping an eye on the Italy international's situation and they will be encouraged by his current situation.

Reports in Italy claim Donnarumma is in a stand-off with Milan over an extension to his contract that runs to the end of next season, meaning he will be free to talk to other clubs as early as January.

Montella has reportedly told Donnarumma to sign a new deal or face a season on the bench and, although he was rather more relaxed in Saturday's media conference, the former striker reiterated Milan's desire to keep him.

"Donnarumma is a great asset to the club and the team – he's not up for sale," Montella said addressing the media before Sunday's trip to Cagliari. "I have recently teased him a bit because I feel great affection for him.

"We all wish he goes on holiday happy and relaxed, which means we can be calmer as well. I hope he uses his head.

"The management [of Milan] is working to keep him. He's not a normal player because we want him to become a pillar of our future."

Former Milan favourite Gennaro Gattuso was revealed as the new coach of the club's youth side on Friday and Montella welcomed him back, before insisting that he does not feel threatened by a high-profile appointment.

"I wish Rino Gattuso the best of luck and I am always available for him," Montella added. "I hold him in great esteem.

"We have already spoken and we agree on lots of things. I don't feel threatened by him; he can be an added value for our youngsters."