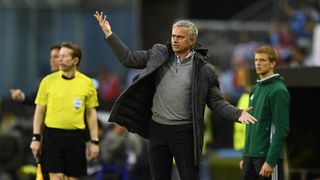 Jose Mourinho claims it is "impossible" for Manchester United to continue fighting on both domestic and continental fronts and admitted all hope of a place in the top four of the Premier League has gone following last weekend's draw with Swansea City.

United's quest to earn a Champions League place for next season has seen them prioritise the Europa League over the English top flight in recent weeks and Thursday's 1-0 win at Celta Vigo puts them in pole position to secure a place in the final, most likely against Ajax, with the winner joining Europe's elite in the 2017-18 season.

The number of matches Mourinho's men have played this season, combined with a raft of injuries, has seen the Portuguese chop and change his team on a regular basis and while he named his first-choice XI in midweek, it will be the fringe players who will take the field against traditional foes Arsenal on Sunday.

Mourinho, whose side are fifth, a point behind Manchester City with four games to play, insists making changes does not necessarily mean he is waving the white flag but feels he has few options.

He said: "We are going to try, we are not going to Arsenal to say 'beat us five or six nil'. We are going there to fight for a result.

"But it's impossible, I can't do it another way, I cannot play with the same team that played here and then repeat again next Thursday [in the second leg against Celta].

"We have to be human with the players, we have to be sensible and [have] common sense in relation to our situation in the Premier League and the last match against Swansea we lost our last chance to fight for the top four so I am going to rest players, yes."

One definite change will see David de Gea come into the side to replace Sergio Romero in goal.

Romero has largely operated in the cup competitions this season but Mourinho says the situation is fluid.

He added: "I don't like to say this competition is for one goalkeeper and the other is for another one.

"Sergio has played one match in the Premier League, David has played two in the Europa League, Sergio has also played in the League Cup while David played the other matches and the final. I don't like that complete separation.

"David plays on Sunday. We have two fantastic goalkeepers. We have a third goalkeeper [Joel Pereira] that I think will be the best Portuguese goalkeeper of the next generation. We have great goalkeepers and the one in goal I trust completely."