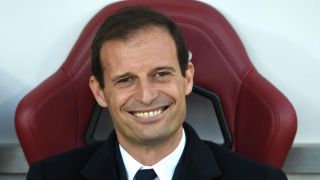 Massimiliano Allegri has warned that Juventus' expensive recruitment drive during the transfer window is no guarantee of success.

Juve forked out €90million to land Gonzalo Higuain from Serie A rivals Napoli this week, representing the third-highest fee in history.

But head coach Allegri says that Juve cannot take anything for granted as they seek a sixth consecutive league title and a renewed challenge on the Champions League.

"Higuain is a great signing as are all the newcomers," Allegri told a news conference.

"The squad is taking shape. The club has enjoyed a fine transfer window, furnishing us with a competitive squad.

"But we cannot rest on our laurels. Getting results is something we cannot take for granted and we have to work hard to win."

Paulo Dybala also addressed the media on Friday and he spoke of his delight at the arrival of Argentina team-mate Higuain.

"I know Higuain while playing for the national team," he added. "We're happy to welcome a real champion into our dressing room.

"He had already expressed to me his desire to come to Juventus."