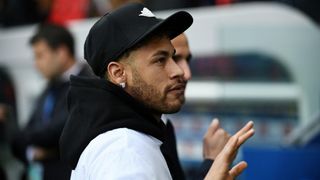 Neymar is an "artist" and will not need any special treatment at Paris Saint-Germain, says the Ligue 1 champions' new coach Thomas Tuchel.

The Brazilian's future has been the subject of intense speculation in recent weeks despite only joining PSG in a record-breaking €222million deal from Barcelona last August.

Real Madrid are reported to be ready to offer Neymar a way back into LaLiga, but Tuchel is looking forward to working with the forward.

"In my opinion the big players are the ones who work the most," the German said at Sunday's unveiling. "I'm not at all afraid to manage stars.

"I met Neymar last Sunday. It was a very important meeting. He is an artist, one of the best players in the world, he is a key player to win our matches. I liked our meeting. I saw a smile on his face.

"He is a player with whom we will create a structure so that he can express himself as he likes to do."

Tuchel denied he will be demanding new signings at PSG and was non-committal about rumours the club could move for veteran Italy goalkeeper Gianluigi Buffon, who is leaving Juventus.

"If the transfer window closed today, I would be very happy," Tuchel said. "Our players are exceptional and I must first get to know them.

"I do not come here with 'I want him or him', there is already a lot of talent, young people too. I only know the team through television, you have to get to know each other.

"I want to help the team, I want to adjust the role of each player to find the best combination.

"I cannot answer that question [about signing Buffon]. However, I am struggling to come to terms with the idea that he will not be in goal for Juventus or Italy.

"Behind this type of athlete, there is always a great personality. I do not know him personally. We'll see what happens."

PSG president Nasser Al-Khelaifi has hinted at a move for Buffon, but suggested Alphonse Areola will remain the first-choice goalkeeper at Parc des Princes next season.