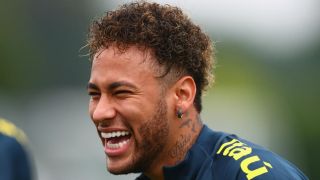 Neymar will play some part in Brazil's pre-World Cup friendly against Croatia on Sunday, head coach Tite has confirmed.

Sidelined since February after undergoing foot surgery, the Paris Saint-Germain superstar will get some precious minutes under his belt as he gears up for the tournament in Russia.

Speaking to the media, Tite announced the 26-year-old forward will not start the game at Anfield - but will be introduced at some stage in the second half.

"He [Neymar] will stay on the bench because he's in the process of recovery," Tite said.

"He will enter in the second half because it's a preparation game for us, for the whole team. He will enter the pitch.

"He has to be a protagonist, but others have to be protagonists as well."

Brazil have been drawn alongside Switzerland, Costa Rica and Serbia in Group E at the World Cup.