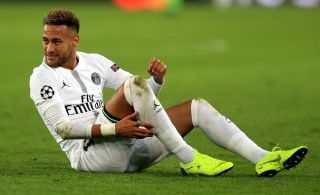 Neymar took to Instagram to rage about the penalty that sent Manchester United through to the Champions League quarter-finals at Paris St Germain’s expense.

Marcus Rashford’s spot-kick, in the fourth minute of second-half stoppage time, secured an impressive 3-1 away victory for United that meant they progressed on away goals.

The penalty was awarded by the Video Assistant Referee when Diogo Dalot’s shot struck Presnel Kimpembe on the arm, but Neymar was adamant the visitors’ winning goal at Parc des Princes should not have stood.

In a story post on the social networking site, the 27-year-old, who missed both legs through injury, wrote: “This is a disgrace, they put four people that know nothing about football in charge of looking at the replay for VAR.

“There is no penalty. How can it be a handball when it hits his back! Go f**k yourselves!”

Romelu Lukaku had earlier scored twice for United in the first half, either side of Juan Bernat’s goal for PSG.