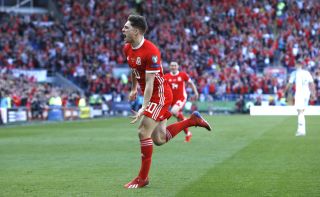 Manchester United will unveil Swansea winger Daniel James as their first signing of the Ole Gunnar Solskjaer era next week.

United have confirmed a deal has been agreed “in principle” with both Swansea and the 21-year-old Wales international.

Press Association Sport understands United will pay Swansea £18million, including add-ons, for the Wales international, with the move expected to be formally completed on Tuesday.

We're delighted to have agreed terms, in principle, with Swansea City for the transfer of Daniel James to #MUFC.— Manchester United (@ManUtd) June 7, 2019

“Manchester United is delighted to announce that it has agreed, in principle, terms with both Swansea and Daniel James for his transfer to the club,” a statement on the Premier League side’s official website read.

“Daniel has successfully completed a medical at the Aon Training Complex. Further details will be communicated once the international transfer window opens next week.”

Swansea also announced on their official website that all parties had reached agreement, adding: “The transfer is expected to be completed when FIFA’s international transfer window opens from June 11.”

James interrupted his preparations with Wales for their upcoming Euro 2020 qualifiers against Croatia and Hungary to undergo a medical at United’s Carrington training ground on Thursday.

A host of Premier League clubs had been linked with James, who thrived in his breakthrough season under former Swans boss Graham Potter, who left the club last month to become Brighton’s manager.

James had been close to joining Leeds in January before the move collapsed at the 11th hour.

He progressed through Swansea’s academy after joining from Hull in 2016 and scored five goals in 38 appearances in all competitions this season.

James made his senior debut for Wales in their friendly defeat in Albania last November and struck the winner when Ryan Giggs’ side beat Slovakia 1-0 in a Euro 2020 qualifier in March.

Following the death of his father, he withdrew from Wales’ training camp in the Algarve last month, but made himself available for Giggs’ squad for the Euro 2020 qualifiers in Croatia on Saturday and in Hungary next Tuesday.

His arrival at Old Trafford is expected to be the first of several this summer as Solskjaer overhauls his squad in a bid to challenge for major honours.