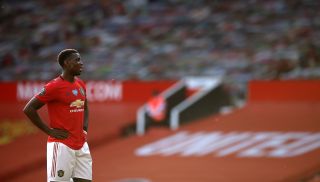 Manchester United completed the signing of France midfielder Paul Pogba from Juventus for a world-record £89million on this day in 2016.

United announced Pogba’s return to Old Trafford at the unusual time of 12.36am on a Tuesday, claiming that was when the deal was done and they did not want the news breaking elsewhere.

Pogba, 23 at the time and who had been sold by United to Juve four years earlier for £1.5m, signed a five-year contract with the option of a sixth season.

The transfer fee surpassed the £85m Real Madrid had paid to capture Gareth Bale from Tottenham in 2013.

That transfer-fee world record has since been broken six times, with Neymar currently the most expensive player after he joined Paris St Germain from Barcelona in 2017 for £198m.

United’s then manager Jose Mourinho declared Pogba could be “the heart of the club” for the next decade after he had been introduced to fans via a glitzy video posted on social media.

But Pogba has struggled to justify his superstar status at United due to inconsistent form and injury.

The France international has been dogged by a protracted foot problem, scoring one goal in 16 Premier League appearances last term, although he has formed a vibrant partnership with Portuguese schemer Bruno Fernandes.