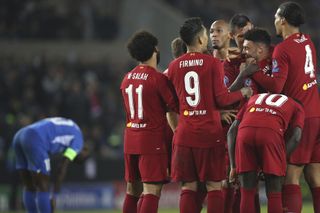 Liverpool midfielder Alex Oxlade-Chamberlain announced his return to the Champions League after an 18-month absence with two goals in a 4-1 win in Genk.

The England international missed all but 20 minutes of last season with a serious knee injury sustained in the semi-final win over Roma in this competition in April 2018.

He made up for lost time by producing exactly the sort of performance manager Jurgen Klopp expects from him, driving forward from midfield and – more importantly – scoring.

His first was good, firing home from just outside the penalty area, but his second was sublime, flicking a first-time shot in off the crossbar.

Sadio Mane and Mohamed Salah also scored – substitute Stephen Odey grabbed a late consolation for the hosts – as Liverpool recorded their first away win in the group stage in five matches and only their second in 10.

Coincidentally Oxlade-Chamberlain scored in the other success in that sequence, the 7-0 victory in Maribor in October in 2017.