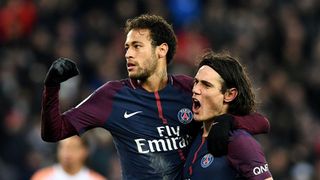 Edinson Cavani became Paris Saint-Germain's record goalscorer as the Parc des Princes was treated to another goal feast in Saturday's 4-0 win over Montpellier.

Cavani had drawn level with Zlatan Ibrahimovic in the 8-0 demolition of Dijon 10 days previously, but missed out on the record at the hands of the penalty-pinching Neymar in that game and also by dint of a wasteful outing against Guingamp in midweek.

However, the Uruguayan did not have to wait long for PSG goal number 157, converting from close range in the 11th minute to supersede Ibrahimovic in the record books.

Neymar doubled the lead with a penalty that was much better received than his one against Dijon and Angel Di Maria brought a sedate second half to life with a fine goal.

Cavani turned provider for Neymar to score the fourth, and the warm celebrations between the pair will hopefully put rumours of a rift between them to bed.

The game had kicked off as a battle of the league's best attack, PSG's 68-goal frontline, and its stingiest defence, but Montpellier's conceded column ticked from 15 to 19 during the game. Unai Emery's men now hold both benchmarks.

Indeed, a 0-0 draw between these sides in August remains the only game in which PSG have not scored this season, but they never looked like being shut out in this one and Julian Draxler dinked into the side-netting in the second minute as they found ways through the visitors' five-man defence.

Another route was found down the left in the 11th minute as Cavani's moment finally came.

Neymar played a role in the record-breaker, working well with Adrien Rabiot to set-up a cross that left Cavani the simple task of clipping home from four yards.

There was a souvenir for a lucky home fan as Cavani threw his shirt into the crowd in celebration, although referee Frank Schneider was less impressed, showing a yellow card - but only after a smile and a congratulatory handshake.

Neymar raised concerns as he left the field to receive treatment on his back, but his next contribution of note was to put PSG two goals to the good.

After Draxler's shot was handled and Schneider pointed to the spot, Neymar stepped up to take with the vocal backing of the Parc des Princes offering a stark contrast to his previous spot-kick and the €222million man duly sent Benjamin Lecomte the wrong way - Cavani the first team-mate to join him in celebration.

A string of Junior Sambia long-range efforts at Alphonse Areola's goal made for a somewhat underwhelming start to the second half, but Javier Pastore's introduction livened up PSG's playmaking and produced a third goal in the 70th minute.

Pastore has been insistent that he does not want to be sold this month and he proved his talents with a brilliant ball to free Thomas Meunier on the right, with Cavani dragging Montpellier's defence to the near post, allowing Di Maria to ghost in at the back and convert the full-back's cross.

Neymar had the ball in the net again soon after, only to be denied by a questionable handball decision, but there was no denying him from inside the six-yard box after a surging Cavani run, adding a final flourish to a record-breaking day.