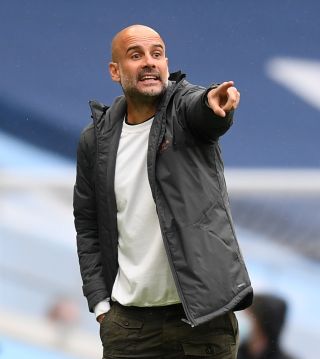 Pep Guardiola has reiterated his confidence Manchester City will have their Champions League ban overturned.

City will learn the outcome of their appeal against a two-year exclusion from European competition on Monday morning.

The club were hit with the punishment in February after being found guilty by UEFA of breaches of the European governing body’s Financial Fair Play regulations.

City challenged that verdict at the Court of Arbitration for Sport and have always been bullish about winning their case.

Guardiola said: “The intention is, every season, to play in the Champions League and do the best as possible. It’s not about what is going to happen on Monday.

“But on Monday I’m so confident because I know, and hear, and saw, the arguments of the club that next season we will be there.

“But we have to wait and after I will give my opinion and the club will give a statement.”

They lead 2-1 after the first leg of their last-16 tie against Real Madrid and now know they will play Juventus or Lyon in the quarter-finals should they finish the job.

City learned on Thursday they will be able to host Madrid at the Etihad Stadium – albeit behind closed doors – after suggestions the game could be moved to a neutral venue in Portugal along with the latter stages of the competition.

Guardiola feels that was a sensible decision.

“Why should we play in another place?” said Guardiola of a game also now confirmed for August 7. “We played the first leg in Madrid, the second leg should be at home. It is a normal situation.

“It is not about an advantage. It is what it is. When there is a knockout of two games, one is at home, one away.”

Were the suspension not hanging over them, City, second in the Premier League, would be almost certain of playing in the Champions League next season.

Guardiola, however, points out it is not yet mathematically secured. He is using that fact, in preparation for the FA Cup semi-final against Arsenal and the game against Real Madrid, to keep his side motivated.

City travel to Brighton on Saturday.

Guardiola said at a press conference: “The best way to keep the condition is to play at high intensity, at our level and our rhythm.

“It’s a good test for us to read the game, to win the last point we need to qualify for next season’s Champions League – an incredible success again – and move forward and keep going.

“Playing the way we have been since lockdown, I am more than satisfied.”