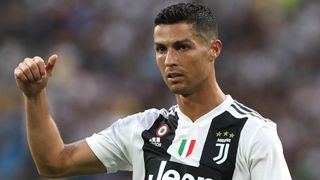 Pjanic, who signed a new contract that will keep him at Juve for another five years, indicated that he and Paulo Dybala were happy to step aside and let the club's €112million signing from Real Madrid assume set-piece duties.

The Bosnia-Herzegovina international also said that Ronaldo's arrival had boosted morale in the squad.

"Cristiano is here now, someone who in the past few years has shown he is the best in the world and we can only benefit from him," Pjanic told the club's official website.

"At first when we trained on free-kicks, it would be either me or Dybala to take it. Now, it's 100 per cent him.

"Obviously: he is a tremendous free-kick taker."

Ronaldo will score "tons of goals" for Juventus this season according to Camoranesi, who said the forward needs time to adapt in Serie A.

Juventus won their opening two league games of 2018-19 but Ronaldo failed to score against Chievo or Lazio as a new chapter in his career began.

The Bianconeri travel to Parma on Saturday, when fans of the champions will hope the Portugal international can open his account for the club.

"We're talking about a player who has scored more than 500 goals, with exceptional qualities," Camoranesi told Tuttosport. "Just because he didn't score in his first two games, it doesn't mean anything. It's just one of those things.

"He'll score tons of goals before the end of the season. He has everything, explosive power, pace and technique.

"Many teams in Italy defend with many players in their own half. This limits the space he has, so an understanding with his team-mates is needed to find it, as well as his great power."