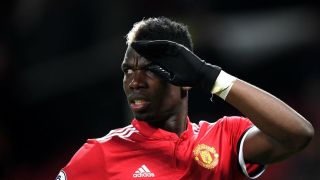 Paul Pogba insists Manchester United have not given up hope of hauling in Manchester City in the Premier League title race.

Jose Mourinho's team trimmed the gap at the summit to 12 points with a 3-0 win over Stoke City on Monday night after their rivals suffered a first top-flight loss of the season at Liverpool over the weekend.

Pogba was influential throughout, laying on fine first-half goals for Antonio Valencia and Anthony Martial against the struggling Potters, before Romelu Lukaku put the destination of the points beyond doubt 18 minutes from full-time.

"Obviously you see Manchester City are in front of us and they lost their first game," Pogba said after being named man of the match on Sky Sports.

"But we have to think about ourselves and think about winning because we have lost a lot of points.

"We need to focus on ourselves, keep winning and I think we will be okay."

United are reportedly favourites to secure the services of Arsenal forward Alexis Sanchez, with neighbours City out of the race and Chelsea rumoured to be launching a late interest, but Pogba hailed the contribution of incumbent centre-forward Lukaku against struggling Stoke.

"Playing with Romelu, I can find him," he said. "Someone who can hold the ball when I pass it to him, then I can make my run – someone to score goals and make assists."