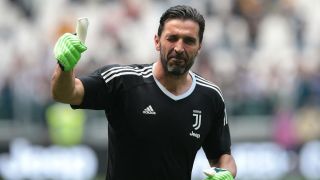 Gianluigi Buffon says only a project as ambitious as the one proposed to him by Paris Saint-Germain could have convinced him to leave Italy.

The veteran goalkeeper completed his free transfer to the Ligue 1 champions on Friday after weeks of speculation, marking the first time he will compete outside of his home country domestically at the age of 40.

Buffon penned a one-year deal with the option of a second after ending his 17-year stay at Juventus at the end of last season, bringing an end to a legendary tenure in Turin in which he won nine Serie A titles and four Coppas Italia.

It was initially expected that Buffon, who fell agonisingly short in his hunt of a Champions League crown, would retire upon leaving Juve, but the lure of one last challenge in France with big-spending PSG proved too hard to turn down.

"It is with a great feeling of happiness that I join Paris Saint-Germain," he told the club's official website.

"For the first time in my career, I am leaving my country and only a project this ambitious could have encouraged me to make such a decision.

"I want to thank the club and the president for their confidence. To have followed the club's incredible progression in recent years, I know what dreams Paris Saint-Germain and its fans have in their hearts.

"I am going to bring all my energy, all my experience and all of my thirst to win to help my new club achieve all the great objectives it has set out for the future.

"With my team-mates and our supporters, we will share fantastic emotions at the Parc des Princes and in all of the stadiums in which we are going to represent Paris, a marvellous city that deserves to one day see its club at the top of international football."

President Nasser Al- Khelaifi added that signing Buffon was a signal of the club's continued ambition to finally conquer Europe.

"We all feel an immense pride in welcoming Gianluigi Buffon into the great Paris Saint-Germain family," he said.

"The immensity of his career, as well as his ambitious personality, unifying and elegant, make him one of the most admired and respected players in world football.

"At 40 years old, his passion for football is intact and Gianluigi has found the ideal environment in our project to set himself extremely high objectives transmitting his experience, not only to the other goalkeepers at the club, but to all of our players.

"Our supporters will know how to welcome Buffon with the enthusiasm and love that he deserves.

"His arrival reaffirms our will to always go higher, an ambition that we intend to pursue with a determination just as strong."