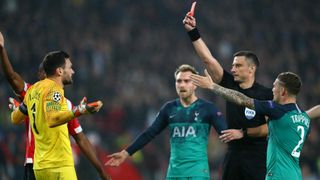 Tottenham suffered a late collapse to draw 2-2 with PSV on Wednesday after a Hugo Lloris red card and an equaliser from Luuk de Jong.

The visitors looked set for their first win of this season's Champions League after Lucas Moura and Harry Kane had overturned Hirving Lozano's opening goal in the first half.

But when Lloris was dismissed 11 minutes from time, PSV sensed a chance for a point and got it through De Jong's 87th-minute leveller.

The result leaves each side on one point from three matches and facing an uphill task to haul in Barcelona and Inter at the top of Group B.

Kane hit the bar early on but PSV took full advantage when Toby Alderweireld gifted them the chance to take the lead. Having allowed Lozano to steal possession, the defender did well to track back only to deflect the forward's shot over Lloris when trying to make a block.

Spurs thought they had levelled barely five minutes later when Davinson Sanchez tapped in from a corner, but the goal was disallowed apparently for an offside infringement against Kane.

They got their equaliser 39 minutes in, though. Christian Eriksen's fine throughball sent Kieran Trippier into the area, and his cut-back was fired home by Lucas with the aid of a deflection.

Spurs rode their luck again when Gaston Pereiro hit the bar just before the break, but a fine passage of play between Son Heung-min and Eriksen allowed Kane to head them into the lead within 10 minutes of the restart.

Mauricio Pochettino's men suddenly looked in total command and should really have doubled their lead, with Kane seeing another header blocked by the leg of Jeroen Zoet and Erik Lamela catching the top of the crossbar.

Lloris was given a straight red card after racing out of his goal and scything down Lozano, and Spurs were unable to survive the loss of their captain, with De Jong prodding home Pablo Rosario's mishit shot.

19 - There were 19 passes in the build up for Lucas Moura's equaliser against PSV, the most of any Spurs goal in their four seasons of Champions League football. Total. October 24, 2018

What does it mean? Knockout hopes are fading

Back-to-back losses to Barcelona and Inter left both these teams in need of a win, and while a point does not rule out their progress to the last 16, neither Spurs nor PSV will be overly happy.

The Premier League side were the stronger for much of the contest and Pochettino will be furious that they allowed two points to slip from their grasp due to a rash moment from the captain and a failure to clear from a set-piece.

The return game at Wembley is a must-win for both.

Eriksen sparkles in return to Holland

PSV have few fond memories of watching Eriksen in an Ajax shirt, and they will not have enjoyed this exceptional performance any more. The Denmark star, only just back from a stomach injury, played a superb pass for Spurs' first goal and created the second in style. He deserved more.

Spurs' task could have been made much more difficult by Mousa Dembele and his lack of discipline. The midfielder was booked 20 minutes in and continued to commit similar fouls with arms raised, particularly in the first half. It was a strange performance of limited composure by the usually excellent Belgium man, who was hauled off for the final 17 minutes.

Before PSV visit London on November 6, Spurs face no shortage of challenges. Manchester City come to Wembley next Monday, 48 hours before an EFL Cup derby with West Ham, and a trip to Wolves completes a packed week.

PSV meet Groningen and Vitesse in the Eredivisie, either side of a cup clash with RKC Waalwijk, before they head to England.