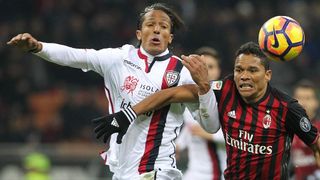 Rangers have completed the signing of Portugal defender Bruno Alves on a two-year contract.

The 35-year-old leaves Cagliari, for whom he made 36 league appearances this season as they finished 11th in Serie A, to move to Scotland.

Alves, formerly of Porto, Zenit and Fenerbahce, links up with countryman Pedro Caixinha, who took charge of Rangers in April.

After his deal was completed on Wednesday, Alves told Rangers TV: "I have this feeling and this desire to win and I think to move here will bring this back to me and to my career.

"I want to be a champion again. This is one of the best feelings that I have in my career and the last time I was a champion at a club was in Fenerbahce. I want to have this feeling again.

"I think I come here for the right reasons and I think that I can bring this back to the club."

A GREAT FIRST SIGNING: Pedro Caixinha is thrilled that Bruno Alves has agreed to sign a two-year deal with Rangers May 31, 2017

Rangers finished third in the Scottish Premiership last season and centre-back Alves is Caixinha's first signing as he looks to build a squad to challenge champions Celtic.

"In my opinion all teams need to be built and organised from the back and Bruno is a very talented and experienced player," Caixinha said.

"I'm also very happy of course that he is my first signing.

"What is important is that he is a winner with a winning mentality and that is something we all want, to put the club on a winning track again."

Alves has 89 caps and is in the Portugal squad for the Confederations Cup in Russia next month, having been part of the group which won Euro 2016 last year.