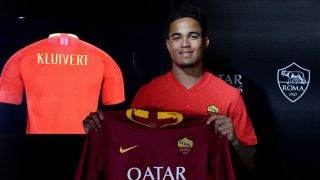 The 19-year-old Netherlands international has signed a five-year deal with the Champions League semi-finalists.

As well as the initial €17.25m fee, Roma could pay Ajax up to €1.5m in performance-related bonuses for Kluivert, the son of former Barcelona forward Patrick.

Roma have also agreed to pay up to €4m as part of a percentage of any future Kluivert sale for a fee in excess of €25m.

"I'm feeling great," Kluivert said. "I'm at an unbelievable club and I can't wait to start.

"I think Roma is a great club for me - I think they can build me into a bigger, stronger player and I can do some nice things here."

Monchi: "Justin is already one of the most exciting young players in European football.“It was not easy to bring him to ahead of a number of clubs. But Justin believes Roma is the perfect place for him to continue his development and realise his enormous potential.” June 22, 2018

Kluivert can play in a number of attacking roles and Roma's director of football Monchi hailed the teenager's talents.

"I think that Justin is already one of the most exciting young players in European football," Monchi said.

"Because of this it was not easy to bring him to Roma ahead of a number of other clubs.

"But Justin believes Roma is the perfect club for him to continue his development and realise his enormous potential."

Kluivert made 56 appearances for Ajax, scoring 13 goals, while he made his senior international debut as Netherlands beat Portugal 3-0 in March.