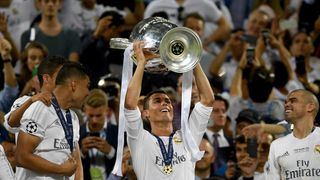 Cristiano Ronaldo believes Real Madrid can still enjoy an "incredible" year if they manage to retain their Champions League title.

Ronaldo was left out by Zinedine Zidane as Madrid crashed out of the Copa del Rey at the quarter-final stage on Wednesday, losing to Leganes on away goals after a 2-1 home defeat.

With Madrid a massive 19 points behind LaLiga leaders Barcelona, their chances of adding to the Supercopa de Espana they won at the start of the campaign look remote.

Madrid face Paris Saint-Germain in the last 16 of the Champions League, with Zidane's men seeking to win the tournament for the third year in a row.

And Ronaldo believes the season can still be judged a success, despite domestic failures, if Madrid are dominant in Europe once again.

"If we can win the Champions League at the end of the year, it will be an incredible year," Ronaldo told Dongqiudi.

"We haven't started well in LaLiga and we are disappointed, nobody is happy about that. But now we must work hard for the Champions League because it's the most important trophy for us.

"It will be difficult in LaLiga, but we can't give up, even if we have dropped many points since the start of the season. We have to keep working."

Ronaldo picked up his fifth Ballon d'Or trophy at the end of last year, drawing level with his great individual rival Lionel Messi, but the Portugal international claims he is not motivated by personal adulation.

"I'm not obsessed with that because I didn't even expect to win the five that I have won," Ronaldo said.

"It is good, though, and between myself and Messi, we have shared the Ballon d'Or for the last 10 years."

Portugal were surprise winners at Euro 2016 - Ronaldo substituted due to injury in the final - but the 32-year-old does not believe his country can be considered among the major contenders for the World Cup in Russia.

"Germany, Spain, Brazil, France and Argentina are going to be the favourites," Ronaldo said.

"Despite the fact that Portugal won't be included among the favourites, we always compete and will do so again."