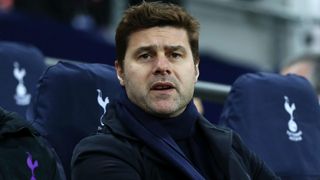 Manchester United should go "all out" to tempt Mauricio Pochettino away from Tottenham, according to club legend Wayne Rooney.

United have enjoyed an upturn in fortunes under caretaker boss Ole Gunnar Solskjaer, winning six on the spin in all competitions ahead of Saturday's home clash with Brighton and Hove Albion in the Premier League.

The Norwegian's early success had led to calls for him to lose the interim tag and be handed the role on a permanent basis, and Rooney admits Solskjaer deserves to have a discussion with the club's owners, the Glazer family.

However, the former England international believes Spurs boss Pochettino - who has been heavily linked with United since Jose Mourinho's departure - should be the top target, considering his excellent record of bringing through young talent.

"First of all, you have to give Ole an opportunity and that's a discussion that has to take place with the Glazers," Rooney said in an interview with ESPN FC. "But if I had the opportunity to appoint someone, I'd go all out for Pochettino.

"I think Manchester United - certainly over the last 20, 30 years, since Alex Ferguson - have based themselves on youth players, young players, bringing players through. I think [Pochettino] gets the best out of his players whether they are younger or older.

"You see some of the young players he has brought through at Tottenham, at Southampton that have gone on to play for the national team, so I think he ticks every box in terms of his quality as a coach, but also his willingness to give youth a chance."

Solskjaer was drafted in from Molde to replace Mourinho, who was sacked in December with the club sitting 19 points behind Premier League leaders Liverpool.

Rooney admitted it was tough to watch United in the closing stages of Mourinho's tenure, but is pleased to see the players now have the freedom to express themselves again, leading to a winning streak that has them in contention again for a top-four finish.

"I think it wasn't nice watching Manchester United over the last year and knowing the players weren't happy, they weren't enjoying it and I think all he's done is say 'go and play, go and express yourselves, and enjoy it'," United's all-time leading scorer said.

"I think if you take Cristiano Ronaldo and Lionel Messi and tell them you have to play here, you have to do this, you have to that, they aren't going to be the same players.

"When you are playing at Manchester United you are good enough to know how to play the game and to know what you have to do on the pitch. You need small details of course, but the biggest thing the players need is to just go play and to go enjoy yourself."