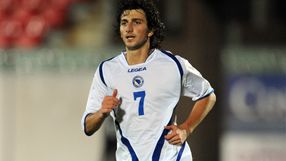 "Miroslav Stevanovic has signed his contract with Sevilla FC," the La Liga club said in a statement on their website.

The 22-year-old had passed a series of medical tests and would be presented at the Sanchez Pizjuan stadium on Thursday, the statement added.

Sevilla did not give financial details but Stevanovic is valued at 1.75 million euros on the website transfermarkt.com, which tracks deals for soccer players.

He joins Bosnia team-mate Emir Spahic, a defender, at the Andalusian club.