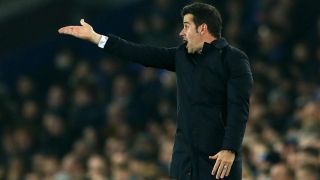 Everton manager Marco Silva bemoaned a lack of focus for the goal they conceded as they were held to a 1-1 Premier League draw by Newcastle United.

The Toffees were looking to respond to their last-gasp Merseyside derby defeat to Liverpool on Sunday but fell behind to a 19th-minute effort from Salomon Rondon.

Everton believed Newcastle had committed a foul in the build-up and Silva, who saw his side respond through Richarlison, felt too many of his players stopped to appeal as Jacob Murphy got down the left and supplied a fine cross for Rondon.

"It was a difficult match like we expected," Silva said. "We had a better first half and we created better chances, but we showed a lack of focus in the goal we conceded. We reacted well and had clear chances which could have changed the match.

"We knew what they came here to do, which was to wait for our mistake. I think the stats suggest we controlled the match.

"To break their organisation you have to play faster and we didn't do that in the second half. We take it game by game and our mentality is to win and do what we can."

Everton did dominate after going behind but their threat was quelled in a much easier manner by Newcastle, who have lost just one of their last six matches, in the second half.

Jordan Pickford, whose derby-day gaffe cost Everton at Anfield, was required to prevent Christian Atsu earning the Magpies all three points, and manager Rafael Benitez felt his side also could have done more in the final third.

"I think we were defending well, the team was well-organised, working really hard, the players were doing a fantastic job," Benitez told Sky Sports.

"But you have to also give credit to them because it's a good team, they play well and it was not easy to play against our team, to break us down, but in the end one point against a very good team could be fine because we cannot forget they have won their last four games at home, they did really well against Liverpool in the derby so we are talking about a very good team.

"We have to give credit to our players because the work rate and application was fantastic."