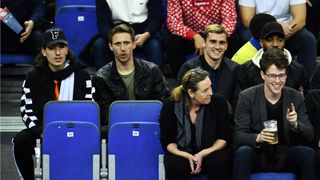 Diego Simeone is unconcerned about Antoine Griezmann spending his spare time away from Spain as long as he continues to be "responsible" for Atletico Madrid.

Griezmann was one of a host of big-name footballers spotted in London for the NBA game between the Boston Celtics and Philadelphia 76ers on Thursday, with the Frenchman sat alongside Arsenal trio Alexandre Lacazette, Nacho Monreal and Hector Bellerin.

The 26-year-old did not feature in Atletico's 3-0 Copa del Rey defeat of Lleida on Tuesday, meaning he was able to spend some free time away from Madrid, which also included a stop in Paris to fulfil sponsorship commitments.

It was put to Simeone that perhaps Griezmann should have been looking to keep sharp on the training pitch rather than travelling around Europe, but the coach is not overly concerned as long as he is acting professionally.

"I think he will be okay and rested," Simeone told reporters at a news conference ahead of Saturday's trip to Eibar.

"Tomorrow [Saturday] he will be full of energy and strength, ready to help his team-mates achieve the goals that the club expect, that's the most important thing.

"After that, they have their own things to deal with, but if they respect [the club] and are responsible with the team, I have nothing to say about what they do or don't do."
Atletico discovered on Friday that Sevilla will be their opponents in the quarter-finals of the Copa del Rey and Simeone is looking forward to pitting himself against the Andalusians' new coach, Vincenzo Montella.

"They're an important rival," Simeone said. "They like the Copa del Rey, they have great players and just changed the coach for a new one [Montella] that has good experience managing the team after his past at Roma, Fiorentina and Milan, regardless the way he left his last club.

"He has great players. It's an important matchup for the quarter-finals the fans will enjoy it."

Atletico host Sevilla in the first leg on Wednesday.

TIME AND DATE CONFIRMED The first leg of our quarter-final match against has been designated a time for kick-off!17 January7 p.m. CET Wanda January 12, 2018