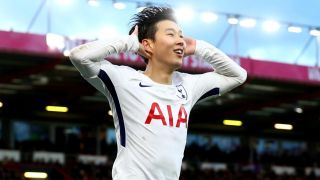 Son Heung-min has been rewarded for his growing importance at Tottenham with a new five-year contract.

The South Korea international, who joined from Bayer Leverkusen in 2015, has pledged his future to the London club until the end of the 2022-23 season.

Son, 26, has steadily taken on a more prominent role under Mauricio Pochettino and featured 37 times in the Premier League last term, including 27 starts.

His 26 league goals over the past two seasons have eased the burden on star striker Harry Kane and helped Spurs to consecutive top-three finishes.

An international since 2010, Son scored twice for South Korea at the recent World Cup in Russia, opening his account in a 2-1 loss to Mexico in Group F.

The second came in stoppage time of a famous 2-0 victory over Germany, which confirmed the reigning champions' shock early exit from the tournament.

Son joins Kane and Pochettino in agreeing fresh terms at Spurs since last season. Pochettino signed a five-year contract in May, while Kane's new six-year deal was confirmed last month.