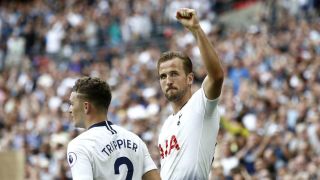 Fulham's last outing on this ground - the Championship play-off final in May - ended in promotion back to the top flight and they looked set for another productive afternoon as Aleksandar Mitrovic cancelled out Lucas Moura's fine opener - the Brazilian's first Premier League goal.

But Trippier, scorer of a sublime set-piece in England's World Cup semi-final defeat to Croatia, repeated the feat with 16 minutes remaining to get Spurs back in front.

Much had been made of Kane's previous failure to score a Premier League goal in the opening month of the season but the striker broke that curse with a precise finish to wrap up the points for Mauricio Pochettino's men.

Lucas' moment of quality was a far cry from his opening contributions as he headed wide of an empty net from six yards before his control let him down when clean through having intercepted a poor pass from Calum Chambers.

Hugo Lloris was not reduced to a mere spectator, denying Tom Cairney and Ryan Sessegnon but two minutes before the break, Chambers' weak clearance fell to Lucas, who curled a first-time strike in off the left-hand post from 18 yards.

Mitrovic struck the post early in the second period but enjoyed greater fortune soon afterwards, nodding home Sessegnon's lay-off from a seated position having thrown himself at Joe Bryan's delivery.

The Serbian shanked wide when presented with an excellent chance to take the lead, and Kane's August hoodoo looked set to continue when he volleyed Eric Dier's cross against the bar.

Trippier's magnificent free-kick, dispatched over the wall into the left corner, restored the lead before Kane did get his goal with a side-footed effort inside the right-hand upright.

What does it mean: Spurs already feeling more at home

Last season, Pochettino's side took just two points from their opening three league games at Wembley, so surpassing that mark first time out will come as a huge boost, especially given this week's news that the move to their new White Hart Lane site will be delayed until late October at the earliest.

Pat on the back: Trippier continues fine form from Russia

Playing in the wing-back role to which he became accustomed at the World Cup, Trippier found himself in acres of room down Spurs' right throughout much of the contest. Just as it seemed the hosts would be frustrated and have to settle for a point, his sensational free-kick - as good as the one he scored in the semi-final loss to Croatia - broke the game open.

Boot up the backside: Chambers looks vulnerable against old foes

After arriving at Craven Cottage on a season-long loan from Arsenal, Chambers' performance may not have encouraged Fulham fans. He was lucky to get away with an errant pass that sent Lucas through, and it was his scuffed effort at clearing that set up the Brazilian's goal.

Spurs, with maximum points from two matches, face a trip to Old Trafford to take on Manchester United a week on Monday. By contrast, Fulham are yet to get off the mark on their return to the Premier League and Slavisa Jokanovic's side host Burnley next Sunday, three days after the Clarets travel to Olympiacos for a Europa League play-off tie.