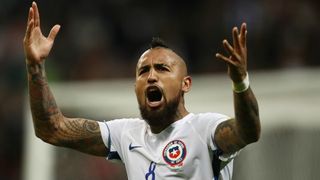 Arturo Vidal has dismissed fears he suffered a new knee injury during training with Chile this week.

There were reports the Barcelona midfielder was in pain during a session in Japan on Wednesday and was forced to sit out practice on the pitch.

The rumours sparked concerns Vidal had damaged the same knee on which he had an operation in April, which kept him out for the final few weeks of Bayern Munich's season.

However, the 31-year-old insists he is fully fit.

"I heard a lot of things and they're all lies," he told the Chilean media. "I've [got] nothing wrong with me.

"I left before training for a rest after a long journey, I went to the gym and used the bike, but I did everything as normal in training.

"It was a 24-hour journey and training after that is not easy, but everything is fine."

Chile's match with Japan was cancelled following the powerful earthquake that struck Hokkaido, causing devastating landslides and crippling the power and transport infrastructure in the city of Sapporo.

Vidal said the Chilean players are safe and are now just waiting to find out when they will be able to leave the northern island.

"We really don't know anything about what has happened in Japan," he said. "We just felt the earthquake. We are fine and a little bored, but that's how things are.

"We felt how strong the earthquake was, we were all sleeping. These are things that happen in life.

"It is important for everyone to know that we are all fine, nothing has happened to us. It was more of a scare than anything else. We have to wait so the problem can be solved and we can all travel to the places we need to go."