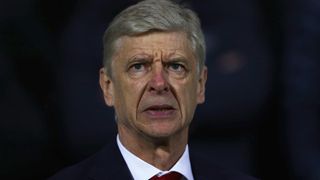 Arsene Wenger has been given a three-match touchline ban and fined £40,000 after he confronted officials following last month's Premier League game at West Brom.

Wenger was furious with the decision by referee Mike Dean to award a controversial late penalty for a Calum Chambers handball, Jay Rodriguez converting from 12 yards to earn a 1-1 draw for the Baggies.

The Frenchman confronted Dean and his fellow officials on the pitch at the full-time whistle and also entered the referee's dressing room without permission.

After a hearing on Friday, the Football Association (FA) confirmed Wenger has been given a three-match ban, meaning he will miss Sunday's FA Cup tie with Nottingham Forest, the first leg of Arsenal's EFL Cup semi-final at Chelsea and a Premier League game at Bournemouth.

"Arsene Wenger will serve a touchline ban for Arsenal’s next three matches after he was charged with misconduct," said an FA statement.

"It follows an Independent Regulatory Commission hearing today [05/01/18] at which the Arsenal manager admitted that his language and behaviour in the match officials’ changing room after the West Bromwich Albion game on Sunday [31/12/17] was abusive, improper and questioned the integrity of the match referee."

Following the West Brom game, Wenger attacked the standard of refereeing in the Premier League, comparing it to the "dark ages", and was subsequently charged by the FA.

Wenger initially said he would "100 per cent" contest the charge, before being asked to explain further comments about Premier League refereeing.

After Anthony Taylor awarded a spot-kick when Hector Bellerin clumsily challenged Eden Hazard in the box during a 2-2 draw with Chelsea on Wednesday, Wenger described the decision as "farcical".

Wenger has been given until 18:00 GMT on Tuesday January 9 to respond to the FA's request.