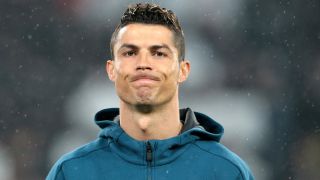 Arsene Wenger believes his legacy at Arsenal would have been different had they successfully signed Cristiano Ronaldo in 2004.

The Gunners held talks with the Portugal star 14 years ago, only to miss out to Manchester United, who bought him from Sporting CP for a reported fee of £12million.

Ronaldo went on to inspire United to eight major trophies, including three Premier League titles and the 2007-08 Champions League, before joining Real Madrid for a then world-record fee of close to £80m.

Arsenal's last league title came three months before Ronaldo moved to Old Trafford, and Wenger thinks they would have had much more success if he had been able to pair the forward with Thierry Henry.

"The obvious player [that we missed out on] that comes to mind is [Cristiano] Ronaldo," Wenger, whose last game in charge finished in a 1-0 win over Huddersfield Town last week, told Arsenal.com.

"He was here with his mother and we were very close. Then Man United came in and they had Carlos Queiroz at the time, who was their coach. United played against Sporting Lisbon and Ronaldo was outstanding and they signed him.

"You could imagine at the time what it would have been like to have Thierry Henry and Ronaldo together. Later Man United had [Wayne] Rooney, Ronaldo and [Ruud] Van Nistelrooy together, they had an exceptional football team, and [Ryan] Giggs and [Paul] Scholes together. That would certainly have changed a little bit the history of my stay here as well.

"There is always something you could have done differently, but the problem of negotiations is to know when you give in and when you don't give in. Once we were at £4.5million, we were still in negotiations. David [Dein] met with [Ronaldo's agent Jorge] Mendes in Paris and he was representing Sporting, so we were very close. But Man United went to £12million, which we could not afford at the time."

Ronaldo is part of a long list of players Wenger has claimed to have tried to sign, which also includes Barcelona star Lionel Messi.

The 68-year-old wanted to bring Messi and Gerard Pique to the club when Cesc Fabregas joined in 2003, although he admits they were always fighting a losing battle.

"The story of Cesc Fabregas is that Franny Cagigao and Steve Rowley brought the player here and we had to convince him," he said. "I met Cesc's parents and at the time we were interested in Messi and Pique as well.

"We tried for the three but of course it didn't work out, but we got a gem there in Cesc and he is an exceptional player. A brain for football.

"[It didn't work out with Messi and Pique] because of the agents. I think it was linked with Nike at the time and they wanted Pique to go to Man United. With Messi, Barcelona didn't want to lose him of course and they made [the offer] that was needed to keep the player at the club.

"I don't really know if Messi was interested…I couldn't get close to try to force the deal because Barcelona stopped that possibility very early."