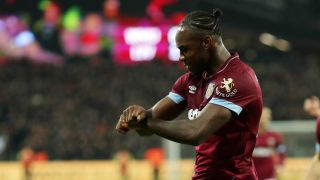 Liverpool missed the chance to move five points clear of Manchester City at the top of the Premier League as Michail Antonio's equaliser meant they were held to a 1-1 draw away to West Ham.

Jurgen Klopp's side went in front through Sadio Mane at London Stadium on Monday, although the goal should have been disallowed for a clear offside in the build-up.

But Antonio quickly levelled for the Hammers, with his fourth career goal against Liverpool leaving the league leaders just three points clear of chasing City, who had defeated Arsenal 3-1 the previous day.

And the result could have been even worse for the Reds, Declan Rice wasting a free header shortly before the interval, although substitute Divock Origi almost won it in added time.

Javier Hernandez wasted two good early chances as Liverpool started poorly, but they took the lead in controversial circumstances in the 22nd minute.

Brilliant skill from Adam Lallana found James Milner, who cut the ball back for Mane to finish well, but replays showed the makeshift right-back was offside when he received the pass.

West Ham equalised within six minutes, though. Felipe Anderson caught out the Liverpool defence with a smartly taken free-kick, sliding a low pass into the right channel for Antonio, who shrugged off Naby Keita and drilled a fine finish across Alisson and in off the post.

Rice and Issa Diop missed headed chances either side of half-time as Liverpool continued to defend set pieces poorly, while Mohamed Salah could not make the most of two second-half openings he created for himself.

But Origi could have settled matters in the 94th minute, the Belgian - a late hero against Everton earlier in the campaign - firing straight at Lukasz Fabianski after Keita picked him out with a chipped pass, the flag staying down again when striker was in an offside position.

4 - Michail Antonio has scored four goals in his five Premier League games against Liverpool, more than he has managed against any other side. Familiar. pic.twitter.com/4wt5r8quFu— OptaJoe (@OptaJoe) February 4, 2019

What does it mean? Liverpool feel the heat

West Ham's inconsistency meant it was hard to guess what Hammers side Liverpool would face, yet it was the Reds - shorn of injured midfield metronome Jordan Henderson - who struggled for fluency in an open game. City will go top if they win a rearranged fixture away at Everton on Wednesday.

With talismanic striker Marko Arnautovic ruled out through injury, West Ham relied even more than usual on Felipe Anderson, the club's record signing, to provide a spark. The Brazilian stepped up, too. He was a constant menace and it was his clever quick free-kick that created Antonio's equalising goal.

A constant feature of the game was Keita losing his man at set-piece situations. Antonio rolled the Liverpool midfielder far too easily for his goal, while Keita was often lax on and off the ball as well.

Liverpool will look to bounce back at home to Bournemouth on Saturday after back-to-back 1-1 draws. West Ham, meanwhile, go to Crystal Palace on the same day.