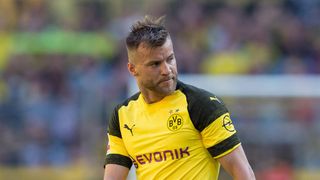 Ukraine international Yarmolenko arrives at London Stadium for an undisclosed fee, reported to be £17.5million (€20m), and has signed a four-year contract.

He follows Jack Wilshere, Ryan Fredericks, Lukasz Fabianski and club-record signing Issa Diop in joining the Hammers, who will be led by Manuel Pellegrini in 2018-19.

"Of course, I am very happy to sign for West Ham. West Ham is a big club with good fans and I am happy to come to play in the Premier League," Yarmolenko told the club's official website.

"The Premier League is the best league in the world and I know that an interesting project is being built here at West Ham.

"The team wants to achieve high things and I am excited for this challenge."

He made 26 appearances and scored six goals in all competitions last term, but missed a large chunk of the second half of the season due to an Achilles injury.

"We thank Andriy for his commitment and wish him and his family all the best for the future," said Dortmund sporting director Michael Zorc.

West Ham are reportedly hoping to bolster their ranks further with a £40m (€45m) move for Lazio playmaker Felipe Anderson.