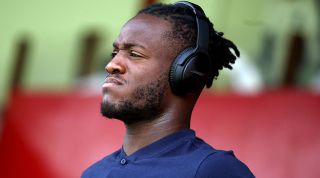 Despite shipping more goals last term than each top-four side plus Wolves, Everton, Newcastle and Leicester (and only two fewer than Crystal Palace), Arsenal have yet to bolster their backline this summer. Even more worryingly, Shkodran Mustafi remains at the Emirates Stadium.

In that context, Chambers might fancy his chances of nailing down a regular first-team role. Primarily used as a central midfielder during last season’s loan spell at Fulham, the 24-year-old has previously played at full-back and centre-half. That versatility could serve him well in 2019/20.

A man who’s barely been seen in an Everton shirt for over two years, Mirallas could be poised for a comeback campaign at Goodison Park.

The Belgian spent the bulk of 2017/18 on loan at Olympiakos, before a single-season stay at Fiorentina in 2018/19. Now 31, Mirallas is back in the first-team picture on Merseyside, and his chances of regular game time have no doubt been boosted by the departure of fellow wide man Ademola Lookman. The Toffees are hardly spoilt for choice in wide areas.

Hopes were high for Jahanbakhsh last season following his 22-goal exploits for AZ Alkmaar the previous year, but the Iranian winger struggled to live up to his club-record price tag at Brighton.

Yet with new boss Graham Potter promising to bring a more attack-minded style to this corner of the south coast, Jahanbakhsh could recapture the form that persuaded Albion to pay £17m for his services last summer.  It shouldn’t be too hard to improve on last term’s tally of zero goals and zero assists.

Burnley’s starting XI has tended to be the Premier League's most predictable throughout Sean Dyche’s tenure, and both Defour and Pope stand to be included more often than not in 2019/20.

After battling with injuries last time out, both midfielder and goalkeeper are now fully fit and ready to seize their chance. Defour was one of Burnley’s most impressive outfielders when they finished seventh two seasons ago, while Pope stands to benefit from Tom Heaton’s move to Aston Villa – and will have designs on a return to the England setup.

The appointment of Frank Lampard, together with a two-window transfer ban, has given hope to Chelsea’s considerable army of youth team products. The optimism of Mason Mount, Callum Hudson-Odoi and Fikayo Tomori is replicated with members of another group – namely, the band of former loanees who are now back with their parent club and desperate to make an impression.

Batshuayi (Valencia and Crystal Palace) and Zouma (Everton) both spent last season away from west London but could have a big role to play this time around. Batshuayi will compete with Olivier Giroud and Tammy Abraham, a perennial loanee, for the centre-forward spot; Zouma, a standout performer at Stamford Bridge four campaigns ago, will hope to force his way up the centre-back pecking order, particularly with Antonio Rudiger currently injured.

Formerly Palace’s regular right-back having joined the club in 2012, Ward lost his place last term as Aaron Wan-Bissaka took the Premier League by storm. But with the youngster having sealed a £50m switch to Manchester United this summer, Ward is ready to resume his role as Palace’s first choice on the right side of defence.

The former Portsmouth man isn’t the type of full-back to rampage down the flank and provide assist after assist, but he's defensively dependable – a quality Roy Hodgson is sure to appreciate.

The biggest blow of Newcastle’s summer was Rafael Benitez leaving, but the departures of Salomon Rondon (who joined the Spaniard in China) and Ayoze Perez means the Magpies have also been forced to overhaul their attack.

The club-record capture of Joelinton has generated most of the headlines, and Gayle's return from a loan spell at West Brom has gone comparatively under the radar. The former Crystal Palace frontman has never completely convinced in the top flight but has the sharp movement and pinpoint finishing to impress if he’s afforded enough of an opportunity. He netted 24 goals in the Championship last term.

An 11th-place finish last season felt somewhat harsh on Watford, who spent much of the campaign higher up the table, only to fall away as they turned their attention towards the FA Cup late on.

Javi Gracia employed a narrow 4-4-2 formation for most of 2018/19, often employing three or four central midfielders in the engine room. That bodes well for Chalobah, who was restricted to just seven league outings last term due to injury.

11 football shirts that were actually improved by a sponsor

Sidelined for 14 months with a knee injury, Reid made his first-team comeback in West Ham’s friendly victory over SCR Altach in July, and will now be eyeing a starting spot under Manuel Pellegrini in his 10th season at the club.

That won’t necessarily be easy after the fine debut campaigns enjoyed by Issa Diop and Fabian Balbuena last time out, with further competition provided by Angelo Ogbonna. Reid is a hugely popular figure at West Ham, though, and if he’s able to recapture his form of old he could re-establish himself in 2019/20.