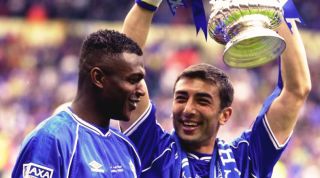 You have 10 minutes to guess 48 players. We're not counting own goals or penalty shootout heroics - sorry Patrick Vieira in 2005.

THEN TRY Quiz! Can you name the 20 most valuable players born after 2000?

Roberto Di Matteo's achieved a lot in English football. He won the Champions League with Chelsea in 2012, after all.

But way before that, RDM has the distinction of scoring the last Cup Final goal at the old Wembley. It was the first Cup Final of the century too, in 2000.

Since then, the usual suspects have lit up the FA Cup final, in Cardiff and the new Wembley alike. But... who exactly?

We're looking for the 48 scorers of final goals in the past 20 years - this year's final has been rescheduled for August 1 - so another player may well add their name to the pantheon before long.

RANKED The 100 greatest football managers of all time