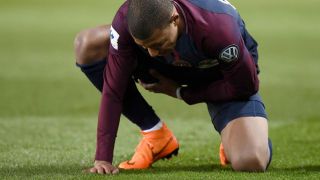 Kylian Mbappe, Javier Pastore and Marco Verratti have all been omitted, handing Weah, 18, the chance to impress.

PSG coach Unai Emery will be hoping Mbappe, in particular, is fit for Tuesday's crunch Champions League return against Real Madrid with his side 3-1 down from the first leg in Spain.

With Neymar also sidelined for up to three months, Emery has taken no chances with the third member of his usual 'MCN' attacking trident as Edinson Cavani - the club's all-time record goalscorer - has been rested for the Troyes game. Centre-back Marquinhos is out with a thigh injury.

Weah, a United States youth international and the son of 1995 Ballon d'Or winner George Weah, is therefore in line to make his PSG debut, while Lorenzo Callegari could start his first Ligue 1 match.

Goalkeeper Alphonse Areola is included despite Emery indicating he was a doubt, but there is no recall for outcast Hatem Ben Arfa regardless of the weakened squad.