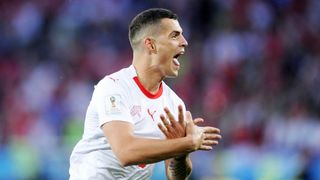 FIFA has confirmed Switzerland internationals Stephan Lichtsteiner, Xherdan Shaqiri and Granit Xhaka will not be banned for World Cup games over their goal celebrations in a win over Serbia.

Xhaka and Shaqiri struck as Switzerland came from behind to win 2-1, boosting their qualification chances in Group E.

Both players put their hands together to form what appeared to resemble a two-headed eagle, which features on the Albanian flag, with FIFA opening disciplinary proceedings against them and Lichtsteiner - who joined in - on Saturday.

However, the trio will not be suspended for Russia 2018 fixtures after FIFA closed the case against them, issuing Xhaka and Shaqiri each with a CHF 10,000 (£7,637) fine.

Lichtsteiner has been fined CHF 5,000 with the trio all warned over their "unsporting behaviour contrary to the principles of fair-play".

Shaqiri and Xhaka are of Kosovar heritage, with the Stoke City midfielder born in the partially recognised nation which was fought over by forces from the Federal Republic of Yugoslavia – Montenegro and Serbia at that time – and the Kosovo Liberation Army during the late 1990s.

Despite being recognised by UEFA, Serbia does not acknowledge Kosovo as an independent state, with relations between the Balkan nations remaining tense.

FIFA also punished Slavisa Kokeza, president of the Football Association of Serbia, as well as coach Mladen Krstajic in relation to comments they made on the goal celebrations after the match.

Kokeza and Krstajic were sanctioned with fines of CHF 5,000 and both men were also warned about their conduct.

The Football Association of Serbia was also fined CHF 54,000 and given a warning "for the display of discriminatory banners and messages by Serbian supporters as well as for throwing objects during the match".

Switzerland face Costa Rica in their final Group E fixture on Wednesday requiring a point to qualify for the last 16.