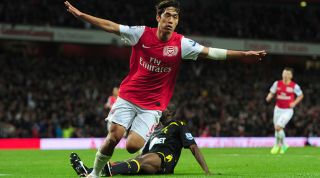 Glenn Hoddle brought Dalmat to Tottenham from Inter Milan in a late loan deal designed to add some much-needed attacking flair to his ageing, underperforming Spurs side.

But the injury-plagued Frenchman proved a troublemaker despite some impressive performances, culminating in a training ground bust-up with Jamie O’Hara that led to Dalmat’s season-long loan being terminated two months early. Not ideal.

Park was on the verge of signing for Lille from Monaco in August 2011, before an 11th-hour phone call from Arsene Wenger convinced him to join Arsenal for €5 million instead. In farcical scenes, Park legged it from a Lille hotel for a flight to London, with officials from the French club going so far as chasing him to the airport.

The South Korean had scored 12 goals in his final season with Monaco but racked up just seven minutes of Premier League action – against Manchester United, naturally – in his first season at the Emirates. He left three years and two loan spells later with one goal and seven appearances to his name.

Djilobodji’s Chelsea career amounted to just 59 seconds of a League Cup third round clash against Walsall. The defender’s £4m move from Nantes was effectively Jose Mourinho making a statement about the club’s ambitions after missing out on John Stones and Raphael Varane, although he also claimed that the signing was “not my choice”.

Djilobodji was loaned out to Werder Bremen in January and joined Sunderland the following summer with similarly disastrous results.

A player who came to embody Pompey’s dramatic fall from grace. Ben Haim arrived from Manchester City in September 2009, signing a four-year contract worth an eye-watering £36,000-a-week with £1m in bonuses.

Injuries hampered his impact at Fratton Park, with the Israeli emerging as a villain after refusing to take a pay cut when the cash-strapped south coast club began tumbling down the Football League.

Maicon was a shadow of his former self by the time he rocked up at the Etihad, having been torn apart by Gareth Bale in two memorable Champions League encounters between Tottenham and Inter Milan.

Recruited for £3 million as cover for Pablo Zabaleta, Maicon made just 13 anonymous appearances for City that season before returning to Italy with Roma.

Roy Hodgson got his ill-fated spell as Liverpool manager off to the worst possible start with his £5 million acquisition of 29-year-old Konchesky from previous club Fulham.

The left-back made just 18 appearances before joining Nottingham Forest on loan, and is best remembered for an incident in which his mum labelled Reds fans “scouse scum” on social media. A roaring success.

With time running out for David Moyes to mark his first summer as Manchester United manager, the Scot went back to basics with the signing of Fellaini from Everton (having failed to land Leighton Baines first).

After months of speculation about potential moves for Toni Kroos and Gareth Bale, United spent £27.5 million on the Belgian, whose £23 million buyout clause had expired a week earlier. It kind of set the tone.

The Brazilian was more Fray Bentos than Andre Santos upon arrival at the Emirates in summer 2011, cutting a decidedly chubby figure throughout his 24 appearances for the Gunners.

Signed for £6.2 million, Santos also became as something of a hate figure among Arsenal fans after swapping shirts with Robin van Persie halfway through a defeat to Manchester United. Comfortably, one of Arsene Wenger’s worst signings.

Rasiak was signed off the back of 16 goals in 35 Championship appearances for Derby, with Spurs manager Martin Jol describing the Pole as "a tall target man, a hard-working, honest player with a good goalscoring record". All of which counted for nothing in the Premier League.

A poster boy for the disastrous recruitment policy of Spurs’ short-lived director of football Damien Comolli, Rasiak looked painfully out of his depth and failed to score in nine error-strewn games before leaving for Southampton.

"There weren't an awful lot of centre-forwards out there we could get and he became available to us at the last minute," Moyes declared unconvincingly upon Stracqualursi’s arrival on loan at Goodison Park.

Though the Argentine’s hard work and commitment earned him cult status among Everton fans, a return of just three goals in 27 games ultimately meant Moyes opted against making the move permanent.

Every Premier League manager by their job security in 2019/20

A year on from a blockbuster summer where Newcastle recruited Michael Owen, Scott Parker and Emre at huge expense, Magpies fans were left scratching their heads following the somewhat less ambitious addition of Sibierski from Manchester City.

Recruited just two hours and 20 minutes before the close of the transfer window, many thought the Frenchman’s signing was part of some elaborate joke. But there was a happier ending: though Sibierski only scored three times in the league, he generally won fans over with his all-action displays.