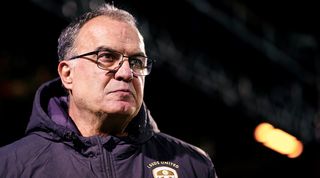 When Marcelo Bielsa first arrived at Leeds United, he didn’t insist on a cringy initiation ceremony in front of his players - as great as it would've been to see him perform karaoke. He didn’t demand that the chairman acquire him slick, new attackers to play his brand of football and he didn’t pose with the club shirt, his name and the No.1 adorned on the back.

And it didn’t take long for the Leeds players to understand just how different this guy was. In their first week under Bielsa, the squad were instructed to litter-pick for three whole hours, just to understand the commitment of the common fan. Bielsa does things his way - and sometimes, the Wombles’ way, too.

With Leeds now back in the Premier League for the first time since 2004 and their eccentric manager getting his first taste of top-tier English football, fans can expect to see a lot more quirkiness...

Sitting on a bucket

While the general consensus is that this particular vantage point must offer an angle of the game that no other manager has yet discovered, it’s claimed by Guillem Balague that Bielsa’s penchant for crouching stems from back pain he’s had since he was a player.

It’s a unique way to watch the game among managers, though. Some managers choose to pace the touchline like frustrated lions, wishing they were out there chasing every ball with their players, while others enjoy sitting in the comfort of their seat. Bielsa, typically, views the game unlike anyone else.

The Premier League has welcomed a number of innovations over the years but watching the game from a crouched position will probably remain idiosyncratic to Bielsa and Bielsa only next season. During one game at Marseille, the Argentinian actually burned his bottom, after a member of his staff had left a boiling cup of coffee on his seat. Safe to say, he almost went El Loco at the offender.

Leeds United have announced Marcelo Bielsa as their new head coach...Let's hope no one leaves any boiling hot cups of coffee around 😂 pic.twitter.com/PaG9nSscsBJune 15, 2018

We all know the story. Bielsa sent a spy to watch Lampard’s Derby County training - before proceeding to show the media the Rams’ weaknesses to prove his research - but Derby had the last laugh with a play-off semi-final win against Leeds. It’s not exactly Revie vs Clough, but a rematch between the two could well be a feisty affair.

“I didn’t call him to apologise,” Bielsa claimed in the aftermath. “He said ‘you violated fair play rules’. It was not convenient for me to explain to him my point of view.”

Lampard was equally sassy when Bielsa was eventually awarded a Fair Play award for Leeds putting the ball into their own net against Aston Villa. “To get a fair play award off the back of that?” Lampard asked, “I thought it was irony at first.”

Whether or not there is any underlying tension between the two - you get the feeling it’s more from Lampard than Bielsa - get ready to read into the post-match quotes when Leeds meet Chelsea. Roman Abramovich certainly won't be happy if he sees the Argentinian with his binos in west London.

A different kind of underdog

Buy it on EbayVIEW DEAL ON Leeds United 1978 shirt

Most teams that escape the Premier League plughole back down to the Championship have similar approaches. Compactness off the ball, a low to medium block, a Premier League-proven goalscorer on hand - or at least a handful of ex-Prem players - and an expectation that hey, possession doesn’t have to be your friend for you to succeed.

It’s unlikely that Marcelo Bielsa will look to the likes of Sean Dyche or Eddie Howe for tips to stay in the Premier League - with all due respect to those particular managers. El Loco is not for turning: expect a high press, building out from the back and an intensity with his side that has rarely been prevalent in Premier League newcomers. Leeds have more in common with Mauricio Pochettino's Tottenham Hotspur side than teams currently battling the drop like Watford or West Ham United.

Remember, Leeds were expected to finish midtable when they appointed Bielsa. They haven’t always played with the expansiveness that he’s instilled but they’re not about to regress into a safer beast - whether or not that approach keeps them up.

A 100% record against Manchester United

Many Premier League grounds will be preparing a pitchside bucket for Bielsa’s first-ever visit next season, while the training grounds install new security fences to escape his spies' eagle gaze into training sessions. But one club that have met the madman once before are Manchester United - and it wasn’t a smooth ride.

In 2012, United were spat out of the Champions League into the Europa League, meeting Bielsa’s Athletic Bilbao in the last-16. A side that featured Fernando Llorente, Javi Martinez and future United captain Ander Herrera schooled the Red Devils home and away, with Athletic winning 3-2 at Old Trafford before securing their place in the quarter-finals with a 2-1 home win.

The high-tempo, swarming press of the Basque side was far too much for Ferguson’s men to deal, with Sir Alex himself claiming, “This is the best Athletic team I have seen for some years.”

How much would Leeds fans love to see their manager extend his record against United next season?

When manager of Barcelona, Pep Guardiola was reportedly shocked at the level of detail that Marcelo Bielsa had prepared on Barcelona, claiming his opponent knew the Catalan club better than he did.

“We [as managers] are judged by how many titles we have won,” Pep gushed. But that is much less influential than how [Bielsa] has influenced football and his players. That is why, for me, he is the best coach in the world.”

The Manchester City boss even has a Bielsa speech on his office wall (presumably next to some Des’ree lyrics). Next season will give us a chance to see the master against the apprentice - and it’s not very often that we call Guardiola an apprentice, is it?

We’ll see high full-backs against high full-backs, a deep-dropping defensive midfielder on either side collecting the ball, and plenty of verticality, passing triangles and fluid movement. It should make for a couple of fascinating games.

Antonio Conte almost claimed the 3-4-3 as his own when he managed Chelsea. Before we knew it, every Tom, Dick and Harry Kane were being squashed into iterations of the system by Premier League managers. Even staunch advocators of the back four, Arsene Wenger and Pep Guardiola were at it, with City and Arsenal cutting about in back threes, to mixed success.

Bielsa’s patented 3-3-1-3 is less likely to catch fire, though far more fascinating technically. It’s perhaps become so famous because it perfectly demonstrates his principles. Bielsa insists on specific regimes for defenders, midfielders and attackers - organising them into solid groups of three, with a No.10 maverick left to roam and create, is a simple yet genius way to show what he’s about. The fact that players can progress the ball forwards with a man in front of them is indicative of his directness, too.

Leeds don’t always line up in the 3-3-1-3. Sure, they resemble a 4-1-4-1 some weeks and Bielsa insists that all of his players are coached in the principles of all 30-odd formations that he believes to exist (it’s unknown if he counts Jose Mourinho’s big-game 6-3-1 from Man United), but it will be novel to see a Premier League side lining up this way - even if it’s just the structure they use to build from the back.

Guardiola’s used the formation too, in an ill-fated second-leg Champions League defeat to Liverpool in 2018 - could we see the pair match up against one another?

In 2016, the city of Rome was gearing up for El Loco fever, as Marcelo Bielsa was set to take over as manager of Lazio - only he resigned two days into his post. It was a day longer than his second season at Marseille lasted, when he mysteriously told the press, “I have finished my work here, I will return to my country,” before leaving.

It’s proof that despite everything, the Argentinian moves in his own way. After a defeat while managing Chile, winger Mark Gonzalez claimed that a livid Bielsa wouldn’t talk to anyone and stormed into another room. “We walked in and he was completely naked, laying on top of a treatment table like someone was going to perform surgery on him,” Gonzalez said, the memory clearly still haunting him. “He was there for about 30 minutes, totally naked.”

He’s called El Loco for a reason. Whether he’s peeking over your club’s fence, burning his arse on a beverage or even delivering vintage post-match interview awkwardness, the best way to prepare for Marcelo Bielsa’s Premier League run is simply to expect the unexpected.

Viva El Loco, and welcome to the Prem, big man.