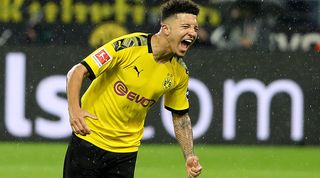 With the winter transfer window officially open, here are a few names from the Bundesliga that could be of interest to Premier League clubs.

One of the very brightest talents of his generation, the former Manchester City academy graduate is bound to be in the headlines every transfer window, even though Dortmund are unlikely to sell their most prominent star. The Englishman offers pace, exquisite dribbling skills, vision, and a brilliant passing range that makes him one of the leading assist providers in the world - not to mention a keen eye for goal too.

Several reports regarding his attitude problems might have been exaggerated, and Chelsea's hopes of signing Sancho in January can't be high – but that doesn't mean they shouldn't try. BVB's minimal asking price is set at €140 million, but the actual fee is bound to be bigger.

The towering Dutchman is one of the most underrated centre-forwards in Europe at the moment. At 197cm tall, he is unsurprisingly very good in the air, but his other qualities help him to stand out much more.

The penalty area predator is unusually mobile for such a lanky player, possessing a surprisingly deft touch. He is capable of providing magical through balls and he opens a lot of space for his teammates. Weghorst took to Bundesliga like a duck to water since moving from AZ Alkmaar in the summer of 2018, and scored 29 goals in that period. Tottenham might be adversed to signing former AZ players after the Vincent Janssen fiasco, but Weghorst's strong mentality makes him a different prospect.

Bailey was one of the hottest properties in the Bundesliga during the 2017-18 season, but the Jamaican's progress has stalled a little recently. Injury and attitude problems made him less effective in Peter Bosz's Leverkusen side, and he is no longer a certain starter. Two red cards this term won't contribute to his image either, but that could actually mean this is the perfect time to sign him at a sane price.

The winger's pure talent is not in doubt, and at the age of 22 he could blossom into a world class star under the right manager.

Once upon a time, Bundesliga fans fell in love with wild-haired defender Harry Koch, who famously won the championship title with Otto Rehhagel's Kaiserslautern in 1998. His son Robin is also a centre-back, but his skills are much more subtle than those of his father.

Koch is a ball-playing defender with excellent positioning and he has been flourishing under the guidance of Freiburg coach Christian Streich, frequently used as a defensive midfielder as well. Joachim Low might see glimpses of Mats Hummels in the youngster, whose national team debut came in November. He is still a little under radar, but not for long.

Kaan Ayhan rose to prominence thanks to goals he scored for Turkey in both Euro 2020 qualifying fixtures against France. His team won 2-0 in Istanbul, drew 1-1 in Paris, and overall presented one of the best defensive lines in the tournament.

The Gelsenkirchen-born centre-back, who represented Germany at youth level, made a great impression alongside Juventus prodigy Merih Demiral and is now destined to star at the finals in the summer. Ayhan, who can play as a right-back and a defensive midfielder as well, was once considered a top prospect at Schalke before knee injuries devastated his progress. He is now definitely back on track, and his skills would be appreciated at a better club than relegation strugglers Dusseldorf.

Ayhan is not only a forceful defender, but also a good distributor and his long-range shooting is fierce, to say the least.

Robin Quaison is a dream player for any coach. He is tenacious, dedicated, tactically disciplined, extremely versatile – and currently making fast professional progress.

Quaison wasn't even part of the Swedish national team plans before and during the 2018 World Cup, but became an undisputed starter in the Euro 2020 qualifying campaign and netted five goals. Quick and unpredictable, he can play anywhere across the front line and attacking midfield, popping up to score when needed. He has got seven goals for Mainz this term already, equalling his entire previous season tally. Quaison could be a superb addition to a lot of Premier League teams.

The attack-minded left-back who can easily play in a more advanced role on the flank, Max made a lot of headlines when providing no less than 12 assists for modest Augsburg during the 2017/18 season thanks to his magnificent left foot.

The German is capable of contributing scoring chances from open play – and he is a dead ball specialist as well - he’s reminiscent of Leighton Baines, just without the Mod haircut. Max might not be perfect defensively, but he is a dedicated player who has contributed six goals and four assists already this season. That could make him a welcome addition to a coach who likes using wing-backs and playing adventurous football.

There are rare cases when a player has a breakthrough season just when his team is sinking without a trace. That is what Milot Rashica is experiencing at the moment.

The young Kosovar playmaker is having the time of his life, scoring seven goals and providing three assists in just 13 matches, but Bremen have won just once since September and dropped into the relegation zone. Could this be the best time to sign the industrious, attacking prodigy, who once hoped to play for Chelsea when starring for Vitesse? Werder won't let him go cheaply, but a good offer could convince them.

While you're here, why not take advantage of our brilliant subscribers' offer? Receive three issues right now for £3, and never miss the greatest football stories from around the world. Cheers!

QUIZ Can you name the five most expensive players from the last 12 Premier League transfer windows?