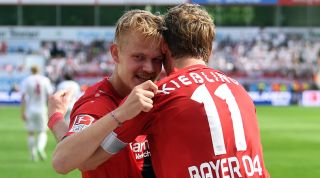 Freiburg were the revelation of the 2016/17 season, with the coach Christian Streich promoting numerous youngsters. Maximilian Philipp has been sold to Borussia Dortmund already, while Vincenzo Grifo has joined Monchengladbach. Caglar Soyuncu is another name on the exceptional list, and the 21-year-old defender is arguably the most surprising of them all.

Signed as a virtual unknown from second division Altinurdu in Turkey, the youngster became an undisputed starter for the team that finished seventh in the Bundesliga.

Soyuncu is far from the finished article; his positioning is not always perfect, and he can be a bit reckless at times. In fact, he often resembles David Luiz, but the Turkish international definitely shares a lot of positive qualities with the Chelsea star as well. Very confident, he is good with the ball, loves to start attacks from the back, and has even been likened to Mats Hummels by some. Both Manchester clubs have already been linked to the Turkish prodigy.

The 23-year-old Greek international is familiar with English football, having played for Fulham on loan from Bayer Leverkusen in the 2014/15 season. Stafylidis' spell with the Cottagers was rather disappointing, as the team had one of the worst defensive records in the Championship, while then manager Kit Symons called his left-back "petulant" following a red card against Leeds United. However, the youngster has made remarkable progress since, and his last season at Augsburg was outstanding.

Tough in the tackle and disciplined at the back, Stafylidis is a modern defender who loves joining attacks. His shooting from distance is exceptionally strong, and he managed to score four goals in 2016/17. The Greek player is a free-kick expert as well, able to place the ball where he wants to.

He has became a crucial starter for a Greek national team that's conceded just twice in five matches in the World Cup qualifiers with Stafylidis on the pitch. Premier League clubs should certainly look at him.

Manchester United know everything about the Scandinavian who scores lots of goals as a substitute. It might be a bit premature to compare Pohjanpalo to Ole Gunnar Solskjaer, but his record for Bayer Leverkusen was absolutely astonishing last season. Believe it or not, the 22-year-old Finnish striker managed to score six goals in just 182 minutes on the pitch.

In September, Pohjanpalo entered the field with Leverkusen trailing 1-0 versus Hamburg with 18 minutes remaining. He scored a hat-trick and gifted his team a 3-1 win. Unfortunately, the rising star was injured shortly afterwards, but it's unclear why he wasn't given many chances in the second half of the season.

Pohjanpalo duly scored as a subsititute on the season's last two matchdays, and he should be desperate to leave for a team that rates him higher. Would a Premier League club gamble on him?

The rise of Demirbay could hardly have been more impressive during the 2016/17 season. Up until last summer, the midfielder was unfortunately best known for his sexist comments to a female referee, having claimed that "women have no place in football". That happened during his problematic loan spell at second division Fortuna Dusseldorf, but joining a Hoffenheim side led by brilliant young coach Julian Nagelsmann proved to be an inspired decision for all involved.

Demirbay was absolutely outstanding last season, his industrious box-to-box performances in midfield crucial to Hoffenheim's historic Champions League qualification. Six goals and eight assists are impressive stats, but they don't tell the whole story about his contribution, and Joachim Low was certainly impressed.

Demirbay has been included in the Germany squad for the Confederations Cup, getting the No.10 shirt. Hoffenheim don't see themselves as a selling club, and the 23-year-old might be reluctant to leave Nagelsmann too soon, but he is definitely worth a look.

Burgstaller has been one of the best January signings in Bundesliga history. The Austrian striker joined Schalke from second division Nurnberg in mid-season, and proceeded to score nine goals in 18 matches, easily finishing as the club's top scorer.

Add three strikes in Europa League, and you get a very prolific forward who loves playing as an old-fashioned, burly No.9. The 28-year-old is perhaps not world-class material, but he'd definitely be a good fit for a mid-table Premier League club. Tall, physically strong and very good in the air, he should thrive in England.

It's quite incredible to think that Cardiff City didn't give Burgstaller a better chance after signing him in the summer of 2014. The Austrian played just three games in the Championship before leaving by mutual consent, but that was a mistake by the Bluebirds. Southampton are reportedly keen on his services this time around, and that should be a different experience for the late-blooming front-man.

Arnold has long been considered one of the very best academy graduates at Wolfsburg. A cultured all-round midfielder, he's blessed with great vision and a deft touch. Quietly self-condifent, he burst on the scene at the age of 19 in 2013, and became an integral part of the team.

When Wolfsburg finished second in the 2014/15 season, Arnold contributed some wonderful performances and scored four Bundesliga goals – three of them from Kevin De Bruyne's assists. During the following season, he was instrumental in the Champions League, starring against Manchester United and scoring versus Real Madrid in the quarter-finals.

The 23-year-old German international experienced a very disappointing season last term, however. Wolfsburg have been poor as a team, and Arnold's form didn't help. Eventually he even lost him place in the starting line-up.

That should be helpful for potential suitors, however. Arnold might not want to stay at his current club, even though Wolfsburg sporting director Olaf Rebbe ruled out selling him. This could be the perfect timing to get him, before the price goes up once again.

Koln had one of the best defensive records in the Bundesliga last season, thanks in no small part to the performances of their home-bred, red-head goalkeeper. Horn has always been a prodigy, ever since getting promoted to Koln's under-17 team at the age of 14.

When the team was relegated from the Bundesliga in 2012, the youngster inherited the spot between the posts from Michael Rensing, and proved to be confident and calm under pressure. That helped him to concede only 20 goals – a second division all-time record – in the 2013/14 season that saw Koln promoted back to where they belong.

Proud to play for the club of German goalkeeping greats Harald Schumacher and Bodo Illgner, Horn is a die-hard Koln fan, and it won't be easy to lure him away. The 24-year-old keeps stating that money is much less important than passion, but Liverpool's interest last summer pleased him, even though Jurgen Klopp eventually opted for Loris Karius of Mainz.

Horn was crucial to the Olympic squad that won silver medals in 2016, but is yet to make his full international debut, and thus could be a little underrated as far as his market value is concerned.

Oztunali might not be a famous name, but the 21-year-old winger is the grandson of one of the greatest German legends of all time – Uwe Seeler. The magnificent striker, who scored 43 goals for West Germany and represented his country at four World Cup tournaments, Seeler spent his entire career at Hamburg. Thus is it somewhat disappointing that Oztunali left his beloved club at an early age, and even went on to represent local rivals Werder Bremen on loan from Bayer Leverkusen.

His career at Leverkusen was somewhat disappointing, but a move to Mainz a year ago proved to be an inspired decision. The team might have experienced a difficult season, and were in danger of relegation for most of the campaign, but Oztunali made significant progress under the guidance of eccentric Swiss coach Martin Schmidt.

He scored five league goals, provided six assists, and his speed on the right flank wasn't easy for defenders to handle. Blessed with good technical skills and naturally two-footed, Oztunali is an exciting prospect, and he could be a welcome addition to a Premier League squad, especially taking his genes into account.