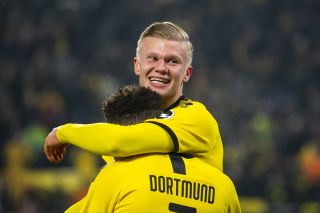 The Bundesliga is back this weekend in “ghost game” form, meaning fans are not allowed to attend.

Anyone with a passing knowledge of German football will know what a huge blow this is. Fan culture in Germany is second to none; they have some of the most die-hard supporters in world football. A silent football ground is unknown.

Still, even without the bier and the würste, the flags and the singing, there's still plenty to look out for in Germany’s top flight...

How tight is Bayern's grip on the title?

A quick glance tells you Bayern Munich are leading by four points with nine games to go. They’ve won the past seven titles, so you’d be forgiven for thinking they’ve got this one wrapped up – but so far, this has been a season of twists and turns.

In Hansi Flick, the Bavarians have an inexperienced coach – albeit one doing an excellent job – and a number of key players over 30, including Robert Lewandowski, Thomas Muller, Javi Martinez and Jerome Boateng. Returning to full fitness after such a long time out might be tougher for them than others.

Borussia Dortmund’s January recruitment could prove decisive. Bagging Erling Braut Haaland midway through the season is the sort of statement that brings silverware. The Noweigian has hit the ground running in Germany, scoring nine in his opening eight Bundesliga appearances and giving Jadon Sancho, Marco Reus and Achraf Hakimi a world class target to aim for. Lucien Favre’s side host Bayern in a potentially season-defining Klassiker on May 26. You won’t want to miss it.

Third-place RB Leipzig have one of the most ambitious and innovative coaches in the league - the 32-year old Julian Nagelsmann - the tightest defence and a striker, Timo Werner, in the form of his life. They also have a habit of losing games they really shouldn’t, which has seen them blow top spot several times this campaign. Strangely, empty stadiums may actually provide a boon to Die Roten Bullen, who receive dog’s abuse at every ground they visit due to their flagrant bending of ownership laws.

Gladbach were the surprise sucess of the Hinrunde, topping the table at the beginning of December. The wheels came off around the festive period but they remain well within shooting distance. Marcus Thuram - son of French World Cup winner Lillian - is genuinely worth tuning in for alone. Think Patrick Vieira size and technique with the feet of Eden Hazard. A terrifying creation.

The two-horse race for the Torjaegerkanone (that's the, er, golden boot)

Lewandowski scored 16 goals in the opening 11 games of the season. He currently has 25 from 23 appearances. If that’s not already jaw-dropping enough, get this: he’s only four ahead of Werner.

The pair have been in sensational attacking form all season and the battle for the 'top scorer cannon' has plenty of life in it. With Leipzig, Werner has the easier run-in, and may feel this is his last chance before a much-touted move to the Premier League at the end of the season. But the Pole is practically superhuman.

It was one of the main talking points going into the campaign and it hasn’t disappointed. Union and Hertha Berlin, for so long separated by the Berlin Wall, have gone head to head in the top flight of German football for the first time ever during 2019/20.

Union, the newcomers, have surprised people, taking three points from Borussia Dortmund in August and winning the first Bundesliga Berlin derby 1-0 back November. The rematch is set for May 24 at what will be an eerily empty 80,000 seater Olympiastadion.

The team from the East sit two points above their local rivals, who have been in the papers for all the wrong reasons this season. Hertha have gone through three managers this season, with Jurgen Klinsmann lasting just 10 weeks, and a replacement only confirmed after lockdown began.

A win for either club could be massive.

How will the Europa League spots pan out?

As always, the hunt for the Bundesliga’s European spots is a close call. Bayer Leverkusen could yet upset the current top four; achieve it and they may hang on to young talisman Kai Havertz (yes, another Bundesliga forward wanted by Premier League sides) for another season. The Germany international is unlikely be satisfied with Europa League football next campaign, though, so the pressure is on.

Sixth-placed Schalke – who have somehow reached those giddy heights while maintaining a negative goal difference – meanwhile, would be thrilled to keep their position until the end of the season.

A betting person might tip Wolfsburg to sneak in the backdoor, however. They visit Gelsenkirchen on June 20 before facing Bayern on the final day of the campaign; an altogether easier task if the title race is done and dusted by that point. The Wolves have a far better defensive record than Schalke and the reliable Wout Wehourst scoring the goals.

Everybody’s second-favourite Bundesliga club, Freiburg (check out that stadium before they move), will also fancy themselves dark horses and, in Luca Waldschmidt, have one of Germany’s rising stars in their ranks to complement ageing club legend Nils Petersen in attack.

Hoffenheim, who were tipped for a tough season after losing coach Julian Nagelsmann to Leipzig, are also in the mixer, to their great credit. It’s sure to go down to the wire.

The “way too good to go down” tag has haunted Werder Bremen all season and, much like for West Ham’s infamous 2003 vintage in the Premier League, it won’t be much comfort when the curtain finally comes down.

A squad including young Germany international Maxi Eggestein, former Ajax captain and Everton midfielder Davy Klaasen and the highly-coveted Kosovo winger Milot Rashica are in the automatic relegation spots. They have a game in hand over their rivals but they have some tough fixtures to come, too, including games against Gladbach, Schalke, Wolfsburg and Bayern.

The club’s decision to stick by young coach Florian Kohfeldt appears to have backfired and Werder will go down – along with bottom-placed Paderborn – for the first time since 1980 unless they can turn things around quickly.

Fortuna occupy the third relegation spot – which would mean a play-off survival match against third top from the second division – and will hope to reel in Mainz or Augsburg, who they face on the penultimate day of the season. It’s all to play for down the bottom.