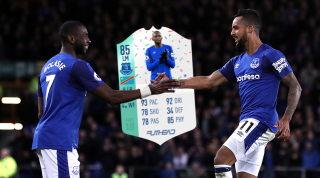 Imminently, there'll be a crop of brilliant players on the market once this year's Team of the Season is revealed. You’d be wise, then, to liquidate your FUT club or splash those spare coins on sure-fire investments with that event on the horizon.

On that note, here’s our pick for the best Premier League squad under £200k while we await Team of the Season...

Begovic’s card might not look like much at first glance, but it’s the closest thing to David de Gea in the Premier League you’ll get. The Bosnia international’s ‘saves with feet’ trait makes him brilliant at stopping driven shots.

The 30-year-old’s huge frame also makes him good at saving long shots, but like every goalie, he can’t stop ‘em all. At sub-2,000 coins, though, Begovic would make a fine addition to your squad until TOTS.

West Ham’s Cheikhou Kouyate was included in EAs FUT Birthday promotion which earned him an upgraded special card and a position change. His card’s role was changed from CDM to CB, thus making him one of the best centre-backs in the Premier League thanks to his impressive speed, height and strength.

IF Monreal offers a great alternative to the likes of IF Marcos Alonso and Ashley Young thanks to his decent pace and solid defensive stats. He doesn’t have any exceptional features, but he can get the job done for you at left-back.

He’d be most effective with an Anchor chemistry style as it’ll boost his jumping and also provide him with a much-needed increase in strength.

With 88 strength and 83 jumping, Everton’s Keane can act as a solid stop-gap in your backline until the TOTS promotion commences. You’ll need to use an Anchor chemistry style on him to boost his aggression from 68 to a more usable 78.

Standing at 6ft 3in and possessing good physical stats, Keane is unlikely to lose aerial duels – unless he’s up against the likes of Ruud Gullit and R9, that is.

We’re slightly past midway in the FUT cycle, and believe it or not Valencia is still one of the best right-backs – not only in the Premier League, but the entire game.

He’s got 85 strength but feels far stronger to play with considering the way he shrugs players off the ball with a shoulder barge. Few stars can go shoulder-to-shoulder with the Ecuador international and come out on top.

With his 87-rated pace he’s capable of chasing down most strikers, although players with similar pace stats but higher agility will outrun him. Still, at just £13k, leave it to Valencia to protect your team’s right flank.

Southampton’s Hojbjerg is easily one of the most overlooked special cards in the Premier League. His stats aren’t the best, but they make for a competent midfield enforcer who’s capable of cracking off dangerous shots from outside the 18-yard area thanks to his 81 long shot stat.

With 75 defending, you’ll need to slap a Shadow chemistry style on to make him better at cutting passing lanes and marking players.

The Brazil international received a +3 upgrade during the ratings refresh which improved his in-game stats significantly, thus making him one of the best cheap central midfielders in the Premier League.

He’s a great card to have in your side while you wait for the TOTS market crash.

Bolasie has been unable to pick up an IF card this season, but nobody talks about that because of his OP FUT Birthday card.

FUT Birthday Bolasie is one of the most enjoyable players to use in the game thanks to his 5-star skill moves, high dribbling stats and insanely good strength for a winger.

He executes skill moves smoothly and is capable of shoving players aside while running along the flanks. His finishing is a massive let-down, though, rated only at 73. You’ll need to slap a Deadeye chemistry style on him to improve that.

Ones To Watch Walcott

Walcott received a winter OTW card after completing a transfer to Everton from Arsenal, and he’s since managed to bag one In-Form upgrade having been included in TOTW 21.

As we know, the England international is incredibly quick – even more so with his high agility – but speed isn’t the best thing about his card.

Walcott has 88 attacking positioning and 85 finishing, with the former making him great at getting into goalscoring areas and the latter helping him find the net once he’s there. He’s a reliable winger who very few players in the game can beat in a footrace, hence why he’d be a great addition to your budget EPL team.

Jesus is arguably the most loved and hated NIF player in FUT thanks to his goalscoring. His pace is rated at 87, but he feels so much faster in-game because of his high agility which makes his ‘tries to beat defensive line’ trait particularly effective.

He makes dangerous runs in behind, and with 85 finishing he finds the net more often than not. He’s a must-have player for every budget EPL side thanks to his massive ROI.

Many view Vardy as a card that's only useful at the start of the game because of his pace, but the Leicester man is much more than just a speedster – he can also convert most of his chances into goals.

With 92 aggression, he’s amazing at pressuring players into giving the ball away, and is also quite good at stealing the ball despite his poor defensive stats.

You’d be surprised at how good the Englishman is once you give him a try.