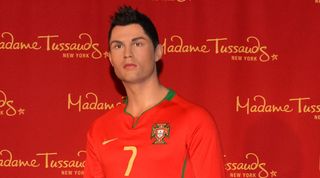 There have been waxworks of some of the Premier League's biggest stars. And Rafael van der Vaart.

After all, what better tribute than having your likeness gawped at by tourists? And when said face is a half-arsed representation, we can at least have a good old laugh.

It's not just an English phenomenon, though: they're at it all over Europe – from Spain to Germany and back to Spain again. And if you thought waxworks of footballers would be a modern happening, think again. They go back at least as far as the 1920s...

The wax really brings out his eyes.

(The waxwork is the one on the right.)

Posh and Becks this time, as Mary and Joseph. It's not offensive because he scored that goal that time.

Some (presumably) rather small children frolic around a wax Gigi.

Next page: Keegan... not loving it

King Kev looks miffed with his waxy doppelganger – and rightly so.

Gazza in his early-90s pomp.

Scored a hat-trick in some match or other.

Shilts, here, looking like something from an old episode of Doctor Who.

Sven lurks in the darkness.

Becks and Little Mo in their late-'90s boyband stage.

Next page: Thumbs up for Zizou!

The fickle nature of waxy fame. Best and Stiles both got the chop from Madame Tussauds in the '70s.

Zizou throws his trademark 'thumbs up'. Wait, hang on...

The only thing stopping Ozil kissing the Madrid badge was his waxiness. Probably why he left...

Cristiano stikes a pose.... y'know, for a change.

We can't even begin to explain what's going on in the background.

Sir Stan watches as Pele catches sight of his house burning down.

Who could forget the famous image of Moore lifting the World Cup? Oh, right...

Dreamboats Beckham and Mourinho face-off, cause each other to melt, etc.

Fortunately, Bestie's now back in one piece at The National Wax Museum in Dublin.