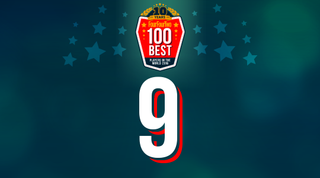 Once in a while, players score goals that perfectly characterise their ability. Aguero did just that in Manchester City's 3-1 win over Swansea City in September: his touch and finish for his first goal was quintessentially him and contained all the elements which make him one of the premier forwards of his generation.

Aguero isn't flash and his game isn't a flurry of step-overs and heel-tricks. Each goal he scores (now 152 in 225 Manchester City appearances) attests to the value of honing simple attributes to their fullest extent and mastering the basics of the game; conveniently, that opener at the Liberty Stadium was a descriptive masterpiece.

There were three elements: the idea, the touch and the finish. In isolation they were all relatively simple, but together they attested to just how quickly the Argentinian's mind works and how reliable his execution is. Touch, touch... goal: it's the archetypal Aguero sequence.

The greatness of strikers can be reliably measured in fear - both of opponents and rival supporters. In only one of Aguero's six Premier League seasons has he failed to score at a rate of more than a goal a game (2012/13) and, as a consequence, there isn't a more respected marksman in the country.

Fans draw breath when he touches the ball around their box and defenders, paralysed by what they've seen and experienced of him in the past, stand off in the hope of not being embarrassed. Goal tallies are a striker's primary currency, but Aguero's worth can also be felt in those micro-reactions; other players fleetingly occupy the same territory, but he never leaves it.

2016 has been a year of growth. Aguero's more blue-collared qualities are evidenced by his self-improvement. His scoring rate remained fairly constant while under Manuel Pellegrini's direction, but he also noticeably became more of an aerial threat. More recently, Pep Guardiola has challenged his work rate and, stung by Champions League exclusion, Aguero’s responded: note his role in the equaliser against Barcelona in November or, more generally, his developing influence within his side's high press.

That's a highly exclusive gene, because there aren't many elite players who continue to evolve once they reach the top of the game. Aguero has done, though. He has his preferred finishes and familiar traits, but it's remarkable how many different types of goal he scores over a full season and how often, even after half a decade.

The low centre of gravity, movement off the ball and short backlift makes him lethal from anywhere within 30 yards and seemingly allows him to exist independently of defensive pressure; given the breadth of opportunity that creates, it's little surprise he continues to be remarkably eclectic.

In a world occupied by Lionel Messi, he can seem unremarkable. He doesn't translate quite as well to YouTube and doesn't draw the same fanaticism, but he remains English football's apex predator and, terrifyingly for everyone but City and Argentina, the statistics suggest that he's becoming more dangerous.