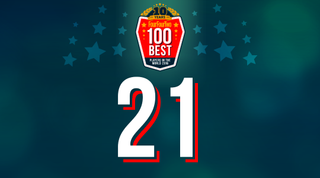 The rebirth of Atletico Madrid under Diego Simeone has been one of the modern era’s purest pleasures, variously spearheaded by the bloodthirsty counter-attacking of Radamel Falcao, Diego Costa and Antoine Griezmann, while the likes of Arda Turan and Koke have pulled the strings.

But it’s not Atleti’s ability to put the ball in the opponent’s net that has caught the eye during their renaissance; instead, it's their near-psychopathic desire to keep the ball out of their own. And at the heart of that process is the man who could quite easily claim to be the continent’s most consistent defender of the past three years if not, more simply, its outright best.

That Diego Godin’s reputation isn’t more fearsome across the globe is perhaps proof that history – or at least a large part of it – is written by the victors. Had one or both of those two knife-edge Champions League finals swung the other way, or last season’s final-day La Liga title race unfolded differently, then we would probably be talking about an all-conquering defensive warrior in the mould of Alessandro Nesta or Nemanja Vidic.

As it is, he’ll have to settle for being the defensive lynchpin of a side that single-handedly disrupted – and for a season, dismantled – the most unshakable duopoly European football has ever known. That Atletico were simply able to mount a title challenge in 2014 is achievement enough; that they’ve retained their place at the top table, all the while reaching a pair of European Cup finals, is little short of astonishing.

Godin’s influence on this feat should not be overstated. For three of the past four seasons, Atletico have conceded the fewest goals in La Liga (in the other, they conceded the second-fewest), a trend that culminated in last season’s league campaign, which saw them let in just 18 goals in total and keep a staggering 24 clean sheets.

Throughout those four seasons, the Uruguayan has been an unwavering presence at the heart of Simeone’s defence, never dropping below the 40-appearance mark and (perhaps more importantly) flying the flag for South American centre-backs everywhere by amassing a grand total of 50 yellow cards.

His angular, loping physique and shabbily receding hairline hardly give the impression of an elite sportsman, which makes it all the more satisfying when you realise Godin is exactly that. His defensive game is largely without weakness: he’s an indomitable aerial presence, has a ferocious appetite for a tackle and possesses that handy knack of coming up with vital goals.

And while he may be a tad underappreciated, he’s hardly unsung: the last six months has seen him awarded Uruguay's highest sports honour by the national parliament in Montevideo, named as the best defender in La Liga and shortlisted for the Ballon d’Or.

As with many at Atletico, you feel he owes much of his progress to his manager. "We have great confidence in him," Godin says of Simeone. "He marks the way for us and we will go with him until death. That is how you achieve things."