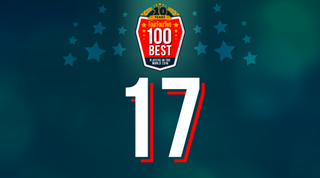 Sandwiched between two highly successful Premier League seasons, Alexis Sanchez played, top-scored in and won the Copa America – Chile's second continental triumph in as many as summers. So, not a bad 2016 at all.

It promises more, though. Whereas Sanchez's first two seasons showed him as a dynamic – and often spectacular – attacking midfield force, in recent months Arsene Wenger has deployed him as the spearhead of his Arsenal formation. It's been highly effective, but also extremely revealing; Sanchez's close control was no secret, nor was his ability to scythe through defensive lines and change games, but this season has showcased his adaptability and revealed what a multi-faceted player he is.

Summers at the Emirates are usually spent fretting over world-class forwards and, truthfully, that has been an obvious Arsenal weakness for some time. It's impressive, therefore, that Sanchez has effectively filled that void. Modern strikers are either built like targetmen or are able to offset physical deficiencies with an abrasive style; the Chilean, however, relies on nothing but technique, intelligence and blood-thinning hard-work to knit his side's attacking phases together. His ability to be both an outlet and a threat at the top of the pitch – no mean feat – has been of the cornerstones of his side's new potency.

Rather than lauding him for his individual impact, perhaps Sanchez's worth is more commonly seen in the effect he has on others. While team-mates at Arsenal - notably Mesut Ozil, Santi Cazorla, and Theo Walcott - have all made significant strides themselves this season, the temptation is to believe that, to differing degrees, those improvements all have Sanchez's influence at their root.

As a false nine, he occupies opponents and contorts a defence's shape, but he's also aware enough with the ball to exploit the space he invariably creates. Important goals were recently scored at the Parc des Princes, Vicarage Road and at the Emirates against Chelsea, but his tendency to create chances is what's stood out most in 2016. Not all of them have resulted in goals – naturally, given Arsenal's habitually profligate nature – but they have still furthered his reputation as a Swiss Army Knife of a footballer and as a utility forward who can be dropped into almost any area of the offensive third with the guarantee of production.

The stunning goals and cute finishes aren’t new, but they're now a lesser part of his overall game: robbing Gary Cahill back in September was an important moment in a big match, but the barometer of his contribution is the reverse passes he’s provided, the touch-and-move phases he’s been a part of and the amount of times Walcott, Iwobi and Ozil have profited directly from his actions.

He was previously great in short bursts, whereas now he’s become a hive of consistent attacking activity, his eclectic range of skills making him almost impossible to subdue. It's been a "what else can you do?" kind of year and, to Sanchez’s great credit, he’s answered that question fully, definitively and to the benefit of his side.