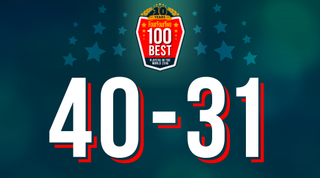 On a quiet New Year’s Eve, in the 48 hours between taking on Leicester and Manchester United, Payet can reflect on an extraordinary 2016. He started the year injured and unwanted by France, despite his stellar form. “A squad has taken shape and I’m not in it,” he shrugged to FFT in February. “You have to accept it.”

Do you? Payet didn’t let up, scoring classy free-kicks, creating the second-most chances in the Premier League, netting nine goals and assisting 12 to become West Ham’s first top-flight PFA Team of the Year representative since 1978.

France did call. And on June 10, having set up Euro 2016’s first goal, Payet hit a stunning late strike to win the hosts’ opener against Romania. One man-of-the-match award followed another, and he was rightly included in the team of the tournament.

Even in West Ham’s dreadful 2016/17, Payet shines. That he had to apologise for an inch-perfect rabona assist against Watford because Troy Deeney said he was “trying to mug us off” is embarrassing for English football. Class means never having to say you’re sorry. – H. Davies

Juventus's “BBC” defence continues to define them, with Andrea Barzagli, Leonardo Bonucci and Chiellini seemingly setting new records every season to ensure Gigi Buffon is the most underworked member of the team.

Chiellini’s robust style and refusal to compromise in any challenge has meant the ageing defender (though is he really only 32?) suffers from an increasing array of injuries, but when fit he remains one of the very best man-markers in the game. As he showed at Euro 2016, he's also capable of weighing in with vital goals and is essential in allowing Max Allegri’s Bianconeri to alternate between three- and four-man backlines. – AD

The first brick in the wall that is Atletico Madrid’s defence – and one that rarely crumbles. Oblak has confirmed his status as one of the world’s best goalkeepers in the last 12 months, notching clean sheet after clean sheet.

In fact, his 18 goals conceded last season was a La Liga low, beating a record which has stood since 1993/94. Such feats are sometimes played down, and the formidable defence in front of Oblak is cited as the key factor. The Slovenian, however, brrings his own class to the backline, and has surpassed David de Gea and Thibaut Courtois considerably in terms of what each individual brought to this Atleti team.

Oblak is the complete package: he commands his penalty area and is strong when dealing with both high and low balls, while he's also blessed with phenomenal agility. It’s incredible that he is this good for a goalkeeper at just 23. – DC

If his first Premier League season was a toe-dip into the unknown, Mahrez’s second was more like a running bomb that emptied the pool.

The Algerian wasn’t even a guaranteed pick in Leicester’s year of great escapism thanks to a string of frustratingly inconsistent displays that the Foxes simply couldn’t afford. But then it all happened. Nigel Pearson was gone, Claudio Ranieri was in, and Mahrez immediately rediscovered the form that excited fans so much after his January 2014 move from Le Havre.

He scored twice on the opening day against Sunderland and then followed that up with two more in consecutive games against West Ham and Tottenham, the latter a smashing late leveller. The brilliance didn’t diminish from there; towards Christmas there was a hat-trick at Swansea, a brace at Everton and a trademark strike that helped bring Jose Mourinho’s second Chelsea stint to an end.

February’s goal at Manchester City confirmed what everyone hadn’t yet dared to admit: that Leicester really were capable of something special. Mahrez, a valid PFA Player of the Year, was at the vanguard. – JB

Next: The oldest member of the FFT100

After Bastian Schweinsteiger was somewhat unceremoniously moved on, the Bavarians' midfield lacked bite. Vidal’s arrival suggested they had found an answer, but it wasn’t until Pep Guardiola’s final chapter at the Allianz Arena that the ex-Juventus star proved once and for all that he was indeed the solution.

From around March onwards, Vidal started to strut rather than slump. He dragged a lacklustre Bayern past Benfica in the Champions League quarter-finals and held his side together in a victorious German Cup final against Borussia Dortmund.

Possessing the perfect blend of fight and flair, the 29-year-old looks set to be the pivot around which Bayern transition into a post-Robben, Ribery and Lahm era. Bayer Leverkusen fans won’t like it, but the young Chilean who once beat the Werkself drum has grown into a leader in Munich. Just cut out the diving, eh Arturo? – JH

While prone to the odd rush of blood to the head, Ramos's weaknesses shouldn’t overshadow what a top-quality centre-back he is on his day. Quick, strong and a key leader in the Real Madrid dressing room, the 29-year-old has become an icon at the club he joined in 2005.

Occasional recklessness can undermine his performances, and although he may have endured a disappointing European Championship, his partnership with Gerard Pique not proving as solid on the pitch as it looks on paper, the former Sevilla defender still played a vital role in Madrid's 11th European elite club success last season. And things aren't going too badly this term for the Madrid outfit, either, clear at the top of La Liga as they are and with the second-best defence at the time of writing.

As the '30s approach, Ramos may not be able to play with the same intensity he used to, so a period of adaptation may be necessary for Los Blancos' stalwart at the rear. But judging by his plentiful past successes we don't doubt his continuing at the top level. – DC

Buffon turns 39 in January, yet age shall not weary him. Even now he's one of the world’s three best goalkeepers, despite being the FFT100’s oldest player by more than three years; old enough to have feasibly sired a dozen of our other entrants (though he probably didn’t).

The veteran insists he’ll retire after the 2018 World Cup. That would be a tremendous shame, especially if Italy aren’t even in it – being in Spain’s group means they may face a play-off.

So if Buffon’s winding down his career, why has he risen eight places in our countdown? Because 2015/16 was among his best-ever seasons. The ex-Parma custodian was hugely influential – the standout player, in fact – in turning Juventus's stuttering campaign into another title triumph. He broke a Serie A record by playing 974 minutes without conceding; it took a penalty to stop him.

And if you think his record-breaking 10 consecutive clean sheets came in easy games, think again: they included 1-0 wins over title rivals Napoli and Roma as well as high-flying Sassuolo and a 2-0 victory over fourth-placed Inter.

The most compelling case for Alderweireld is being made by Tottenham’s form since his recent knee injury: when the Belgian was carried off at The Hawthorns in mid-October, most of Spurs' organisation and resilience went with him.

That wasn't in any way a surprise, though; overlooking his country's disappointing European Championship, Alderweireld's 2016 has been exemplary. Aside from his generally flawless defending – his aerial ability and anticipatory qualities – he provided his team with an extra layer of distribution which, in the latter half of the year, they've missed just as much. His long-range passing often created attacking opportunities, while his reliable equipping of the midfield consistently enabled the temperament changes which Mauricio Pochettino's football relies upon.

Alderweireld is something of an anomaly: he's both a highly skilled, dynamic and modern defender, and yet also a traditional, static centre-half. He's a hybrid player comprising all the desirable attributes from a range of eras and, consequently, is incontestably among the world's very best. – SSB

It's extremely difficult to separate one Silva season from the next. That's a compliment: his form is so stable that it's near impossible to identify his peaks and troughs or to tell whether, in fact, his career has just been one long, excellent game. Whenever you see his little feet flash as he pirouettes daintily through the chaos, it's a sequence that could belong to any of the last seven years. Silva is that rare thing: excellence that never seems to waiver.

Kevin De Bruyne's arrival at Manchester City stole his thunder. The Belgian was the dynamism in Manuel Pellegrini's attacking midfield and, under Pep Guardiola, has become an even more diverse threat. But Silva’s still there, slipping out of the small spaces and dancing between the tackles; by the end of the 2015/16 campaign, he was statistically his club's most creative player.

The same as always: Silva will belong among the world's best until he decides he doesn't want to play anymore. – SSB

Voted fans’ player of the year for the third season running, De Gea himself thought that 2015/16 was his best season in a Manchester United shirt. The Spaniard kept 15 clean sheets in 34 Premier League games and denied Romelu Lukaku from the penalty spot in the FA Cup semi-final against Everton, before starting all four of Spain’s matches at Euro 2016 ahead of Iker Casillas.

The former Atletico Madrid man is now undoubtedly among the best goalkeepers on the planet, having consigned his difficult start to life at Old Trafford to the history books. De Gea's incredible reflexes have saved his side on numerous occasions in the last 12 months, most impressively in his stops to deny Chelsea's Branislav Ivanovic in February and Liverpool's Philippe Coutinho in October. – H. Drudge